The hunt met at Stonebow Farm in Ashleworth and should have listened to their supporter who told them “Charlie [fox] isn’t going to be near the water” in response to David Redvers’ post (see picture below) as they did indeed draw blank, repeatedly, near the flooded areas by the nature reserve.

(Redvers is a master of the hunt. Yes, Gill Heaven, this photo is more than a month old, but you’re local and should be able to see that some areas are still pretty damn wet!)

We had the expected comments from supporters like Rob Lewis (“did you get any tampax last week?!” – see report of the kill which took place in Eldersfield last week if that needs some context…)

We only had about half the day free so kept an eye on them the best we could into the afternoon, having the police called on one of our sabs who was being shouted at for being on a footpath (by a guy in a shooting fleece…). The sab concerned would love to speak to the police in relation to this incident, his language and threatening behaviour, so please do get in touch officers.

Only a few meets left of the season for this hunt, so no slowing down for us just yet. Got a lot of videos to catch up on once the season ends though, so keep an eye on our page still! 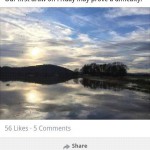 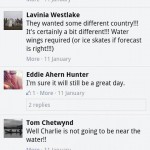