On Friday 19th February the Ledbury Hunt killed a fox in Eldersfield near Hillfield House. Three members of Three Counties Hunt Saboteurs had been out with the hunt throughout the day and there were a number of indications that the hunt were not following a trail, but were chasing foxes. Turnout at the hunt was high due to jockey AP McCoy’s presence.

On this day as with most others when this hunt are out, there was a cockiness of being ‘above the law’ and when told that they were on the scent of a live fox, the usual sarcastic comments came out: “are you going to arrest us?” and “take us to court then!” as hunt staff lift the pack and take them them to the line of the fox – see our previous video from Eldersfield as an example – https://vimeo.com/147898619

Towards the end of the day, the hunt having just marked to ground in a well known badger sett & having criss-crossed land in Eldersfield Marsh for a couple of hours, huntsman Mark Meladay gathered the pack of hounds and started making his way towards the road to pack up at Pigeon House Farm.

Hounds picked up & streamed towards the road at Hillfield House, a sab inland watching out for a fox breaking towards her. Hounds sounded stationary, huntsman still encouraging them on, so she ran towards the road. The kill was taking place in a hedge. More details will follow when our video – currently in the hands of the police – is realeased publicly.

The official stance of the Ledbury Hunt is that the fox had been shot & dumped in a hedge by a sheep farmer. A newspaper, The Ledbury Reporter, says that a member of the hunt had examined the body and found that the fox had been dead a while and had gunshot wounds. Reality is that the fox body was still hot and bleeding when the sab pulled him from the hedge, entrails hanging from his torn abdomen. Another sab grabbed his body and put him in the car whilst the first sab exited the field to comments such a “have you come on or summat?!” and “you deserve everything you f***ing get” from known hunt supported Robin Lewis & friends. Hunt supporter Richard Leeke blocked the road to sabs in the car using his Mitsubishi and immediately got on the phone.

We took the long way round to pickup the third member of our group who was meanwhile being threatened by a large male hunt supporter & we saw the hunt packing up as we drove out of the area. Photos were taken on a quiet road away from the hunt soon after.

We publicly ask Hunt Master David Redvers to explain exactly who he claims examined the body and where and when this took place. 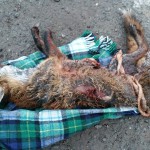 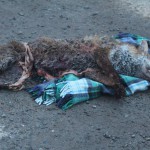