3C split up again to go to the Croome and West Warwickshire hunt and the Ross Harriers as well as do a fundraising and awareness-raising event at a Lush store. Busy day!

So, to start off the reports, here is one from our good friends in North Shropshire – always a pleasure to work with you. We present: The Ross Harriers

“Yesterday, along with one of Three Counties Hunt Saboteurs we paid a visit to the Ross Harriers. It was a bit of a funny old day really. After following them to the meet from the kennels, via the local petrol station (Owains pathetic attempt to shake us off nearly resulted in him crashing into an unsuspecting member of the public on the roundabout) we arrived to a shockingly poor turnout of just ten or so riders, including hunt staff.

With thick fog shrouding the countryside, they moved off into the valley. As we were very short on numbers and what with the Harriers reputation for criminal damage to vehicles, we had to stick fairly close to the vehicle. However, we could hear Owain in the valley trying his best to draw cover after cover but to no avail.

Moving from wood to beet field, luck was against old Owain. Each time drawing blank. You have to question the abilities of the said trail layer and the huntsman if the huntsman failed to pick up any of the scent laid down for the hounds (just joking, we all know there isn’t a trail layer).

And this was pretty much how the day went, interspersed with lots of trotting along country roads, seemingly they didn’t have much territory to hunt so spent a lot of the day mooching about on the roads around Orcop hill.

At around three o’clock, we stopped to check an area of woods as we suspected they were heading back to the meet. As we walked into the field, hounds were heard in full cry and half the pack were seen disappearing into a small wooded area with Owain the huntsman heard hunting them on. Using voice calls and hunting horns, we called them out of the wood taking them off the line, and back in the direction of the huntsman.

Realising he had been caught encouraging his hounds onto an animal, Owain panicked and desperately tried to call them back, sending “Turkey” aka Martin Bingham (who was back whipping in) scurrying off to retrieve his lost charges.

Owain didn’t seem very pleased that we were doing his job better than he was by stopping his hounds hunting and made some reference to us needing “a cock”. No need Owain, we’ve got you ;P).

We left him gathering up his hounds and returned to the trusty sab wagon only then to have a rather angry, red faced rider ride one sab into our car and whilst slightly foaming at the mouth, accuse us of hunting the hounds on. Oh how we laughed.

Anyway, that pretty much sums up the day. See you soon, North Shropshire Hunt sabs x”

The Croome and West Warwickshire:

The Croome and West Warwickshire had their Opening meet near Peopleton. Foot sabs were on the ground all day but it wasn’t until the end that the Bicester boys (hunt stewards who like sabs and travel miles just to be close to us) finally found one sab. Aided by beer boy who was looking for some male sabs to beat up coz apparently they are all “c**ts”, he was struggling to stand straight they made an exhibition of themselves by the side of the road. Beer boy was more than a little tipsy and drove off in a white pickup with a hard top VX14 AZW. He is clearly a danger to himself and others so whichever side of the fence you are on please stop him from driving when he is pissed.

Other 3C sabs sabbed the Ross Harriers with North Shropshire sabs and yet another did a stall outside Lush in Oxford and we were there again today so busy weekend and maybe 5 Opening meets this week!

After last week’s assault on a 3C sab and a sab from NORTH Shropshire HUNT SABS we asked two things of our supporters. One was to politely contact the National Star College who were hosting the Cotswold Hunt Christmas Fair next month and ask them not to host a hunt who have been filmed illegally hunting and being involved in assaulting sabs.

The other request was to share our recent appeal (again) as the sab from North Shrops had her camera stolen on the day in question. We’ve since received several donations, including some cameras, and the National Star College is reported to have cancelled the Christmas Fair.

We couldn’t do it without you all. Thanks to all our supporters! 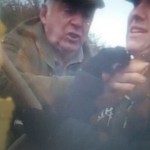