Fox just found with bite mark to throat just after Hounds and quad had been past by Welsh Borders sabs. Body still warm. Cotswold Vale Farmer’s Hunt, Twig worth. Suspect that one loose hound killed this fox… 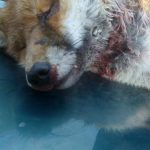 Once again, we met up with Three Counties Hunt Saboteurs and we paid a visit to the Cotty Vile who met in the village of Sandhurst. With most hunts cancelling due to the hard frost, and with Simon’s reputation for falling off, we didn’t expect them to leave the meet. Alas, a little later than normal, they skulked out of the back of the farm and headed off towards the river.

Hounds were soon in cry and riders were seen on point in a field of sheep! Clearly the hunt don’t want lightning to strike twice, this time the farmer might not be quite so understanding. With Simon clearly heard hunting them on in an area almost inaccessible for any trail laying, sabs used voice calls and whipped back hounds, lifting their heads and giving the fox time to make his escape.

After moving to another cover, hounds went into cry again. A 3 Counties sab filmed a brace escaping out the back of the wood whilst we called hounds out of the front. Another fox ran past another 3 C’s sab across a road whilst the hunt moved off and up onto the top of the hill.

We had at this point reached that oh so familiar point in the day where Simon lost some of his hounds. This is pretty much a given where old Scatterpack is concerned. As some sabs watched his pathetic attempts to gather up his pack, other sabs heard hounds in cry at Twigworth. and when they entered the field to investigate, could hear hounds speaking in one field and found the still warm and bleeding body of a young vixen in the next.

On closer inspection, clear bite marks to the throat could be seen.We can not say what happened to this poor fox, we did not witness her death. What we can say is this,
1) when her body was found, Simon had lost some of his hounds
2) several hounds were heard speaking in the next field to her body
3) it only takes one hounds to kill a small fox like her
4) the hunt terriermen asked for her body back after we removed her

At this point we were joined by Bristol Hunt Saboteurs South Wales Hunt Saboteurs and Bath Hunt Sabs as the hunt moved back up the hill. With hounds in cry again, all five groups worked together to call hounds off and when asked if he was going to claim the kill, Simon looked very “Sheepish” indeed! But inch high private eye Nick Hodges was happy to take credit for her death. On their last draw,one fox was seen running to safety as sabs rated hounds once again. As the light failed, the hunt headed back to the meet.

We will update this report when the details of the post mortem are known.