The North Cotswold Hunt were spotted yesterday, 25th January 2017 near Aston Somerville, just South of Evesham and in the North Cotswolds cull zone. Today it was intended to sett check post hunt but we didn’t just find a blocked sett. 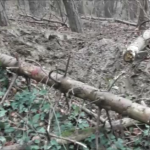 A large sett was found within half a mile of where the hunt were seen and as expected it was blocked (the badgers had not managed to get out overnight). On closer examination it became clear that the sett had been dug out and filled back in again. There was also evidence of historic blocking at the site. There was blood strewn a fallen tree, leaves and brambles along with intestines, skin, liver, red fur and other bits of tissue. There were hound prints everywhere and signs of hounds marking as well as trying to claw their way into the sett.

We have no idea whether this fox had been fed to the waiting hounds alive or dead. What we do know is that both fox and badgers within this sett must have been terrified as they sent terriers in and dug down.

Multiple hoof prints from the mounted field and the quads were within yards of this atrocity.

The police were informed and some entrances were unblocked so that the badgers can now get out. They could have easily followed their own pre ban guidelines and unblocked those entrances but why bother? They had their fun and that was that. Come September they can kill them in a government sponsored cull.

If you see a hunt in your area please check where they have been, you could save a life! 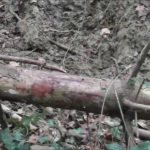 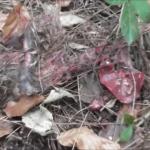