“Use of dogs below ground to protect birds for shooting”

Nothing is mentioned in this section about the use of spades, so some believe that this means they are not prohibited, however this section of the legislation is about what is permitted. Looking again at the criteria for this exemption, it says that that the wild mammal must be flushed out from below ground by a dog, not dug out with spades. Digging-out does not come under the definition of ‘flushing’ or ‘stalking’.

Let’s look at it another way… the Hunting Act came into play and it prohibited all hunting of wild animals with a dog. So using a terrier below ground to find a fox would be illegal. But they didn’t want to actually stop terriermen from doing fox control for landowners, so they decide to write an exception. The exception says that hunting with dogs is illegal but if some exact criteria are followed then it can be allowed. And so they allow one dog to be used to flush a fox from underground to a competent person with a gun. If those criteria aren’t specifically met, then the use of a dog is illegal.

If a dog is not being used for fox control, then digging into a fox earth or drain or other area for a fox would be lawful as there is no law against using spades while trying to kill foxes*. The Hunting Act only comes into play when a dog is brought into the situation.

There needs to be more clarity with regards to using the Gamekeepers’ Exemption whilst out with a hunt and many police officers agree that if you’re out with a hunt, you’re not a gamekeeper at the time and that if a fox has been chased to ground, you can’t be certain that this fox is the same ‘troublesome’ local fox who you desire to kill to ‘protect’ your birds for humans to kill. But the exemption is certainly clear with regards to whether spades can be used… (and that includes terrierwork away from hunts – gamekeepers are also not allowed to use terriers AND spades even if they have nothing to do with packs of hounds and foxhunting!) 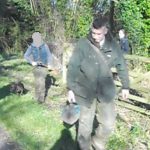 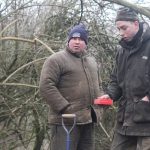 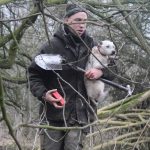 Spades or dogs… not both!

The following Western Daily Press article is in relation to a case where, in short, a vehicle was pulled over due to it towing a trailer with no lights and one of the men from the vehicle jumped out and ran off with a bag he pulled from the trailer. He was chased down and police found a live fox in the bag as well as terriers in the vehicle with facial scarring. There is an interesting quote from the RSPCA in the article:

“The three were arrested and when questioned claimed they had written permission to do what they were doing but did not have it with them at the time.

“This piece of information was to be the key to their successful prosecution as the Hunting Act 2004 states that those legally hunting in such circumstances must have written permission on their person,” said a spokesman for the RSPCA.”

Looking at the criteria above for hunting to be legal in this situation, yes, written permission would be necessary. However, the list of criteria clearly states that the wild mammal must be shot as soon as possible having been flushed from below ground. If your intention was to legally shoot a troublesome fox, surely you would have a competent person with you with a gun?

Nowhere in the criteria above does it imply that ‘putting the wild mammal in a bag’ is permitted. OK, it doesn’t specifically state that it is prohbited, but it clearly states that the criteria listed must be satisfied and that list includes shooting the animal dead as soon as possible once it has been flushed from below ground. Surely being shot “as soon as possible” by a “competent person” is put in there to ensure that the animal’s suffering is not drawn out? And isn’t putting it in a bag doing exactly the opposite…?