Never has history been more relevant to anti fascism then now. Those who do not remember the past are condemned to repeat it is indeed a truism worth with remembering. Right wing extremist ideology is on the increase in Europe, We have xenophobic “Freedom” parties holding large number of seats in various governments we have continued murderous rampages spanning the century’s from the London Nail Bomber, David Copeland to Anders Breivik in Normay.

We welcomed in a new century with the unwelcome presence of groups such as the Scottish Defense League, The English Defense League, The Scottish National Front and the BNP who have been allowed to spread their ignorance with the help of the rampant Islamophobia in the mainstream media and a lack of political will to change that. It’s always easier to hide incompetence and rampant greed when you have a soft target to blame, this again is history repeating.

We hope all the people ofAberdeen and everyone in else in theUKwill look at the great anti fascist movements in the early 20th century for their inspiration. They help us understand that we did not tolerate anyone spreading messages of hatred and that we did not tolerate anyone trying to divide our community’s. The simplest solution for solving difficult an issue is solidarity, not division, and the simplest solution can turn to the final solution all too easily.

Aberdeen, like all most towns and city’s in theUKcontributed greatly to anti fascism in the 1920′s & 1930’s. There were many international brigadiers not only fromAberdeen, theUKbut from all over the world who fought against Franco’s Fascist takeover inSpain. Many volunteers traveled across knowing that Hitler would useSpainas a test run for his new “Blitzkrieg” tactic… or as Donald Rumsfeld would called in back inIraq“Shock and Awe.”

Below are collections of writings on the history Anti-Fascism inAberdeen:

There is so much we want to see once more

We will stroll in the Puerta del Sol

We will cross theEbro– and drink with our friends in Mora

We will look at them and at each other

And if we live to be a hundred

We’ll have this to be glad about

Because of that great yesterday

We are part of the greater tomorrow 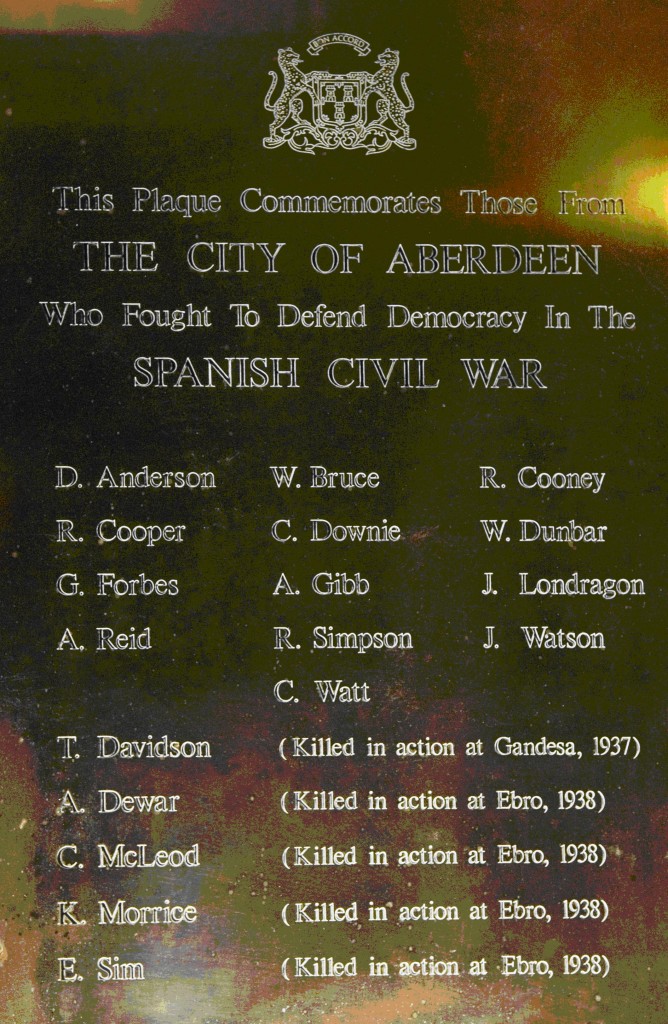 Bob Cooney joined the Communist Party as a very young man in Aberdeen; he was a great speaker, activist poet and musician. He fought against Fascism as Political Commissar with the British Battalion of the International Brigade in the Spanish Civil War. Bob continued the fight against Fascism by joining the British Army at the outbreak of World War II and was on active service for the entire duration.