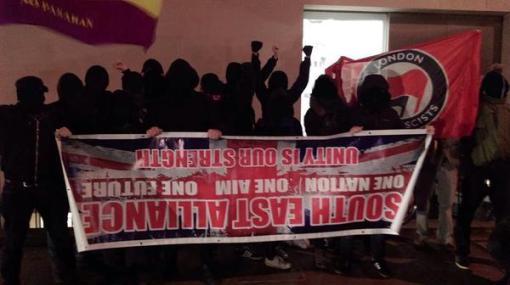 … These were some of the items a sad crew of 30 assorted fascists lost on today’s ‘Secure our Borders – Support the Truckers’ shuffle round the roundabout on the Dover seafront, opposed by around 40 autonomous antifascists.

The fascist plan to ‘blockade the port’ was promoted by a few obscure fascist groups on their Facebook sites, the demo being designed to coincide with “Sauvons Calais” anti-immigration demo on the other side of the Channel. English Volunteer Force, National Front, and white power flags were spotted on the Dover demo.

As is traditional, the fash gathered in a car park under a grey sky, and on seeing us antifascists retreated to the garden of a local pub – which turned out to be closed. So they were confined to the garden for a pintless hour until they mustered up enough numbers to move.

With an escort of Kent police, the Master Race shuffled their way towards the sea front as we dodged trundling lorries and tried to block their path at every turn. It was good to see comrades well organised, fast moving, and looking out for each other at all times – and not a single UAF placard in sight. That the fash were able to leave the pub at all and do their photo op on the roundabout was however a problem – one we probably could have dealt with with larger numbers.

The fascists were eventually escorted back to their car park and left, apparently too dejected to hang about for a celebratory drink. In a final humiliation, one minibus of dimwits thought it would be a good idea to drive past and taunt the antifa mob – whilst stuck at the red lights. The driver, in a panic, tried to reverse over members of the crowd. However the van ended up stopped in the road. The driver was arrested (presumably for dangerous driving) and made to do the walk of shame to the police car, before their minibus was confiscated by the cops. Two of our comrades were arrested – we’re still awaiting news of whether any charges will be brought.

Over on the other side of the channel, the Sauvons Calais demo was banned by the local authority, and comrades there say it was a quiet day with no serious incidents.

Other reports of the day:

“English fascists took a beating in Dover on Sunday” Vice

“Dover and out!” Hope Not Hate