Posted on July 5, 2011 by bristolnoborders 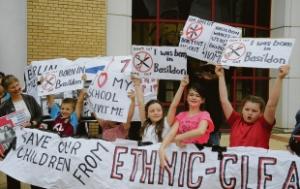 Yesterday, Monday 4th July, some 90 families at Dale Farm, the UK’s largest Traveller community, were delivered final notices of eviction, giving families until midnight on August 31 to abandon their homes, or face their entire community being bulldozed. The central government and Basildon Council have set aside over £18m for the eviction battle that could last three weeks. It will be the biggest clearance of its kind involving the ploughing up of 54 separate plots which were created out of a former concrete scrap-yard, purchased by the Travellers ten years ago. These notices were left attached to peoples homes (see photo, left). Here are copies of the letters: Eviction notice p1 Eviction notice p2 Eviction notice p3 Eviction notice p4

Dale Farm is only a 30 minute train ride from London, and hundreds of people have pledged to join residents in nonviolent resistance to the destruction of Dale Farm. The residents of Dale Farm have encouraged their supporters to establish a base at Dale Farm, Camp Constant, to resist this eviction and house human rights monitors.

THIS IS A MASS CALL OUT FOR ACTION: JOIN CAMP CONSTANT NOW!
Camp Constant, a mass gathering of national and international supporters of the Dale Farm community will begin Saturday, August 27th:
* Starting with a weekend of Traveller history & celebration
* Plus practical eviction resistance training
* Training for legal observers and human rights monitors
* Opening party, Saturday night
Sleeping space is available in caravans or you can bring a tent if you can stay Saturday night. The eviction could go ahead right after midnight on August 31st, so we will be staying at Dale Farm before then in preparation.
* You can sign up to email bulletins here: http://lists.ucrony.net/cgi-bin/mailman/listinfo/dalefarm-solidarity