The wait is over, and we have five confirmed dates for the Democracy Outside tour, and each of them is, in one way or another, a landmark date in the history of government, democracy, and power-holding and decision-making. 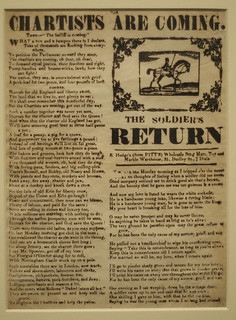 Words to the Chartists' song The Chartists Are Coming, thanks to Plashing Vole via flickr.com Creative Commons

Join us in Bristol on the anniversary of the 1836 founding of the London Working Men’s Association. Out of the LWA came the Chartist movement, a working class campaign for democracy and political reform that had 6 main demands:

They don’t sound so radical now, but despite a petition that attracted ‘millions’ of signatures the Chartist’s demands were not met outright, though many of them were incorporated in later parliamentary reform acts. So that’s alright then! This is also the day that, in 1958, the leaders of the 1956 Hungarian popular uprising against the Communist Party government were executed.

The Brighton performance falls on the day that, in 1997, the Hong Kong turned from a colony into a Special Administrative Region (a semi-autonomous zone which after 50 years will become part of China proper) when sovereignty of the territory was transferred from Great Britain to China. The Democratic Party of Hong Kong refused to join the Provisional Legislative Council as they would not take part in what they felt was a sham democracy, and so were excluded from the first post-handover legislative council. Ironically June 30 is also the anniversary of Congo becoming independent from Belgium in 1960, under its first Prime Minister Patrice Lumumba.

Celebrate with the disabled rights activists of Change in Leeds on the anniversary of the first flying of the Aboriginal Australian flag in Adelaide in 1971. This is also the day that, in 1789, French revolutionary journalist Camille Desmoulins made a speech that started the ferment that led to the storming of the Bastille on 14 July – the event that really kicked off the French Revolution…

And finally, help us wrap up Democracy Outside’s 2012 tour 76 years to the day after the birth of Revolutionary Catalonia, the autonomous region of Spain held by anarchists and socialists at the start of the Spanish Civil War, which lasted through two and half years of terrible struggle, and constant battle against right-wing and government forces. The story of Anarchist Catalonia has inspired many who believe that it’s possible for women and men to work to bring about an equal, fair and just society free of dictatorship.

The problem with historic dates is that we always interpret history through the biases, lenses, and hopes and fears of the present. But we can still be inspired and enraged, and ultimately learn from the things that have gone before.

So join in with Democracy Outside when it comes to a town near you, and let’s explore a new way of doing politics together!

Help tour Democracy Outside around the UK – give us a fiver, a tenner, or some spare change: http://www.sponsume.com/project/demo-2012