Sun, sea and speaking up: Democracy Outside in Brighton

On Saturday 30 June, Democracy Outside went to Brighton – and what a day we had! It turns out sunshine (see last post for the observation that bad weather = low voter turnout) and enthusiasm are a great combination of ingredients for exciting dialogue, and creative participation in imaginative exchanges of ideas and opinions. We drew in strangers and passers by, people who thought they didn’t have much to say – but found they did; children as well as more experienced (i.e. older) citizens. We found out about each others’ opinions, and thanks to participants from Sweden and the USA, we found out about other kinds of government and monarchy. Some of us found out new things about ourselves – a woman who has been a councillor in her own town, said she surprised herself: “I always thought of myself as someone with very firm, fixed opinions about things – but I found myself sometimes moving about when I heard others speak, and standing in the middle on many issues.”

We talked about lowering the voting age, the possibility of a ‘just war’, (military) intervention in Syria, the separation of church and state, whether Britain is democratically governed, the difference that quotas of female MPs might make, the Royal family, encouraging democracy in schools, and much much more. Democracy Outside is a work constantly in progress (like democracy!) and after Brighton I’ve developed some new questions for the next outings. Come and join in if you’re nearby! Coming up: Leeds, Briggate (near Debenhams), 11am Wednesday 12 July; Hebden Bridge, St George’s Square, 2pm Saturday 14 July; and Manchester, 1pm Piccadilly Gardens & 2pm St Anne’s Square, 21 July as part of the Hazard arts festival…

Meanwhile, here’s a flavour of the fun in Brighton: 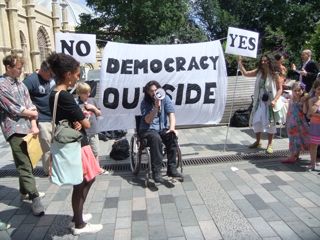 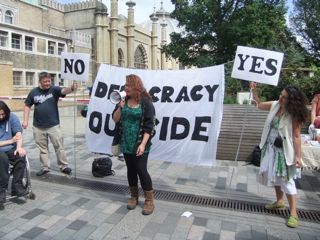 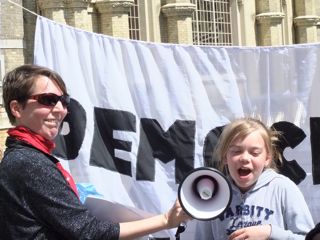 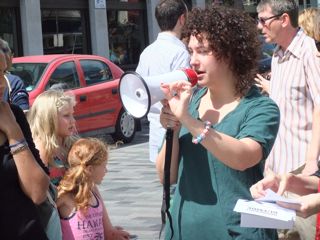