Democracy Outside is an interactive public performance about democracy, it makes political movement(s) real, it’s part street theatre & part political action, it blurs the boundaries between ‘art’ and ‘activism’, it challenges apathy and the neutralising of public space – and it’s fun! 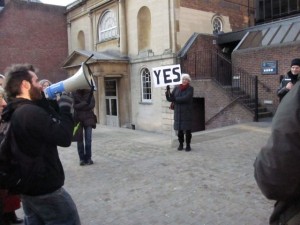 I developed Democracy Outside following the student protests of autumn 2010. There was so much energy, such a buzz of creativity and protest in the air – and despite the deep frustration, so much humour in the students’ home-made placards, and their approach to the protest: there were kids in the kettle at one demonstration performing Harry Potter spells on the riot police. But at the same time, I realised a lot of people felt left out of the increasingly loud political debates, unsure of what they felt or thought, or how to express their views. Standing in the crowd at local anti-cuts demonstrations, I wondered whether we could find a way to open up, creatively and imaginatively, the public space for a real exchange of heartfelt expressions.

In 2011 I staged Democracy Outside in Oxford and Devon, with groups of  artists, local campaigners, international activists, and the general public. Young people who had felt excluded from politics, and that their voices weren’t heard even though they were expected to join the army to fight for their country, joined in with gusto. Artists who felt they had no political views found themselves passionately voicing their feelings about the judiciary, parliament and institutionalised sexism. Activists came away energised by a new way of ‘doing politics’.

About me, Clare Cochrane

I’m an activist, and a graduate of the Social Sculpture Research Unit at Oxford Brookes University. I went there to work with Shelley Sacks to explore my own creativity, which I had suppressed for years in order to ‘do politics’. But I found that as much as I needed my creative work to engage with the wider world, I also needed my activism to be meaningful, creative, alive. I still hesitate to call myself an artist, except in the expanded sense understood by Joseph Beuys, who, when he said “Everyone can be an artist”, meant that we all have the ability to imagine and the ability to consciously and creatively shape the world we live in. As social animals, we can – we must – do this together.