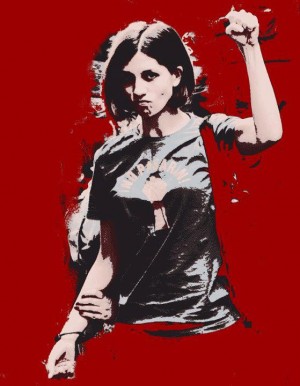 So much media coverage of the cause celebre Pussy Riot trial and verdict last week. Live coverage of the verdict on BBC News 24 and  almost all of the reporting was sympathetic to the defendants political activism and critical of the soviet style charges, courtroom and sentence which was considered ‘disproportionate’. Maybe our much-derided mass media have suddenly decided to report the treatment of anarchists and feminists fairly.

However, in the same week two anarchists returning from the St Imier congress in Switzerland were detained under Section 7 of the Terrorism Act 2000 at Heathrow and subjected to intimidation and interogation. http://libcom.org/news/uk-anti-terrorist-police-detain-anarchist-federation-member-16082012  No media coverage whatsoever.

The facebook rioters in Dundee last year, currently incarcerated for a riot that didn’t occur, received no positive media coverage and no show of international solidarity either.

As Chomsky and Hermann pointed out in their classic analysis of media , Manufacturing Consent, each reported story has to fit into the propaganda model of the dominant elites. Thus, opponents of Putin are victims of a repressive, Evil Empire Soviet-style  regime, whilst anarchists in Britain are dangerous subversives and extremists not deserving of civil rights.

The position in the US media is similar and some radical commentators have associated the overwhelmingly positive coverage of the Pussy Rioters with US geo-political goals in isolating and destabilising a regime which opposes US hegemony in many spheres.

It is worth asking how the US media would treat similar actions taken in, say St Patricks cathedral in New York. Though tazered and gassed by the NYPD, Occupy protesters have, after all, elicited very little sympathy from the mainstream US media over the last year or so. Neither have the 11 student activists and one lecturer who are threatened with goal and huge fines over anti-bank protests at the University of California. http://davisdozen.org/

Whilst none of the above should stop us demanding Free Pussy Riot or Down with Putin, and deriding the whole concept of blasphemy as a crime, activists should focus on the real issues of hierarchical power and erosion of civil liberties not just in Russia but right across the world and point out the sheer hypocrisy of the western media and political reaction.

Hierarchical power structures are limiting of humanity and creativity, and the root cause of many social and health problems.

Anarchists seek to abolish all hierarchies – whether in unaccountable global corporations, in the state sector, or in our personal relationships.

Elections don’t give any real democracy, instead we seek direct local participation in decision-making and community stewardship of resources.

Rather than globilised production of worthless goods for profit, we would aim for environmentally-sustainable local production for real needs, bringing back good craftsmanship.

Anarchists take direct action – to highlight and prevent abuses and exploitation, and also to build non-hierarchical alternatives here and now.

Dundee Together Against Racism and Fascism 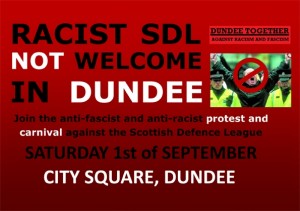 Musicians and entertainers will stand together with trades unionists and community groups to celebrate the city’s  cultural diversity and proud history of rejecting racism and fascism in a Community Carnival planned for Dundee City Square on 1st September.

All Dundonians are urged to share in this celebration of their city’s people as a response to those who wish to create divisions between our communities with their messages of racism and hate.

Dundee Together will host a broad, community-based event, showcasing the best of Dundee’s vibrant, creative and diverse cultures. The event starts at 10am with music, speakers, stalls, seminars, childrens events and a peoples picnic.

Amongst the acts are Hanney, the Cundeez, Bi Tilo, the Twist, Latin Quarter Salseros and many others. 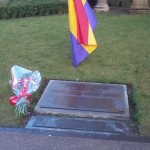 A procession and wreath-laying ceremony to commemorate the seventeen Dundonians who died fighting fascism in the Spanish Civil War is planned for noon, and the Free University, Dundee will hold a seminar on achieving ‘Freedom from Fascism’ at 11 am.

The event has been organised in response to a threat from the Scottish Defence League to demonstrate in the city on 1st September. Although their application was refused by the city council, the SDL have released a statement that on that date they are coming to the city anyway and the people of Dundee should “be ready”.  Consequently, trade unions, community and student groups have united to form Dundee Together to counter any threat of intimidation and hate against the people of this city. 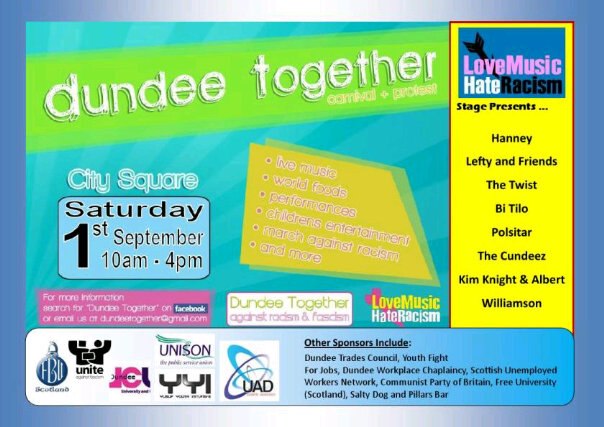