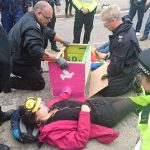 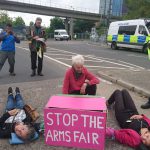 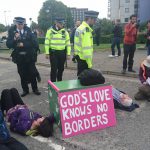 Stopping the arms fair on a Tuesday morning!!!! pic.twitter.com/3U2EpdgF59

The activists intention was to create a prayer space for faith groups to gather and witness against the arms trade. The blockade formed the basis of a prayer space decorated with prayer flags and banners.

Following this action there were other actions in which members of Put Down the Sword abseiled from the bridge and Quakers blocked the road with a massive were arrested. Altogether peace activists held the road for [xx] hours while faith groups from the Quakers, Pax Christi, Wake Up, Anglican Pacifist Fellowship said prayers and bore witness. There was a bring and share lunch for all faiths.

The names of the those taking part in the direct action are Chris Cole, (53) of Oxford, and Nora Ziegler (26) Joanna Frew (38) and Henrietta Cullinan (56) all from London.

At a time when war has become so normalised that it has faded into the background, its more important than ever that we say a clear and simple ‘no more war preparations ‘.

‘Like Theresa May, I am a vicar’s daughter. But unlike Theresa May, I see the principles of the Christian faith as an active commitment to non-violence. Jesus risked ridicule, imprisonment, torture and, ultimately, a political death sentence to teach us radical non-violence and peacemaking.

The arms fair, supported by Theresa May’s government, contributes to war, violence and oppression in countries where conflict and suffering is beyond imaginable, such as Yemen, Bahrain and Israel-Palestine. DSEi also helps the border security industry to push equipment and ideas that deal with migration as a crime that needs to be stopped. The Bible is full of examples of welcoming the stranger and providing hospitality. We are here to say that this is the kind of welcome we want to see, not one for dictators and murderous regimes.’

For further information on the protests see:

For further information on the two groups see:

Put Down the Sword https://putdownthesword.wordpress.com