This article is a free translation of the Turkish original (“Sendikalar Yasası: Bir Yalanın Anatomisi”) published in Bianeton July 18th, 2012. The author of the article, Kıvanç Eliaçık, is the director of the international relations office in DİSK, the Confederation of Progressive Trade Unions of Turkey. 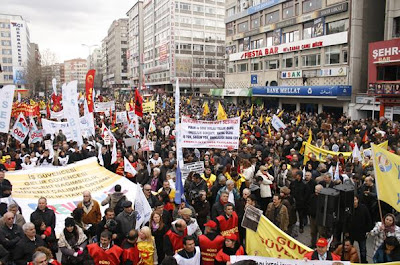 If a trade union that collaborates with employers lost its mind and started a campaign called “We want slavery” demanding “We want to work 16 hours a day. No to salaries!” would the government take this proposal seriously?

The news-hound asks: “The new trade union act is on the way! The barriers will be taken down! If the actual number of their members is announced, many trade unions will be shut down! The bans on strikes are being abolished! What do you think about these issues?” This type of journalism would be an excellent example of government propaganda material rather than an interview.

In Turkey, a worker can be prevented from becoming a member of a union or even demanding rights by being fired, arrested and sometimes even murdered. Trade union acts prepared after the 12th September Military Intervention are still in effect. Labor courts function really slowly, and the simplest union activities are stopped violently. In such circumstances, we read some news saying the trade union act will be changed. It is promised that the changes will be in accordance with the ILO Agreements, which Turkey already has signed. Yet the reform in question is always being postponed.

It has been claimed that if the postponement of the reform is an iceberg, then the disagreements between workers’ organizations and employers’ organizations (or even between trade unions) is only the tip of it. Yet for ILO or UN agreements to be applied, you do not need a “consensus” among the parties. For example, if a trade union that collaborates with employers lost its mind and started a campaign called “We want slavery.” and demanding “We want to work 16 hours a day. No to salaries!” would the government take this proposal seriously?

The responsibility of the government is to guarantee basic human rights. The government; that never consults the workers about anything related to labor and that passes strongly controversial laws in a single day despite trade union opposition; appeals to “consultation” methods in order to stall the process, when it comes to trade unions act.

Those who do not bother to listen to ILO’s advice and criticism want us to believe that there will be improvements in the law, atexactly the same time when they are prohibiting strikes in aviation and arresting trade unionists. It is not easy to believe that, because we have a dead body in front of us. We must perform an autopsy on the laws that have no use other than preventing the exercise of trade union rights. 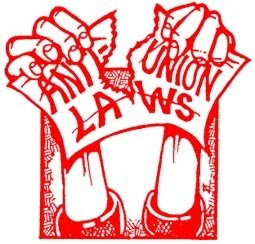 Here are the results of the autopsy of the laws 2821 and 2822, which were prepared right after the 1980 military intervention in order to prevent trade union activities, to restrict collective agreements, and to prohibit strikes:

If a worker wants to join a trade union, the first step s/he must take is to go to a public notary and have the membership form approved. Turkish Airlines can fire its employees via “sms”, but a worker cannot say “I’ll go to join the trade union” to her/his employer. S/he has to get a half day off to be able to go to the notary, and a whole day if the factory is far away. S/he has to pay 47 TL to the notary for the approval of the form. While it is not needed to go to a notary when joining an association or a political party, one has to pay even to quit a trade union. Actually, quitting is even more expensive! If you want to change your trade union, you must pay 138 TL in total.

Your job is not finished when you have been to the notary. Let us suppose for the sake of argument that your employer was not aware of the situation and did not fire you, and that your reemployment lawsuit didn’t take two years. You have two more obstructions against exercising your collective agreement rights. The workplace barrier and the sector barrier… Your trade union must have 10% of all the workers in your line of business. For instance, a metalworkers’ union must have, among the 1.279.000 legally employed metalworkers countrywide, at least 127.900 members in order to be able to have the right to collective agreements. And then, the same union must have half of the workers in your workplace as members too.

When the boss hears of union activities, s/he fires union members and especially those who invite others to join a union, with a variety of excuses. An employee who has been working for ten years gets fired all of a sudden due to low performance. And all the employees with the same surname are laid off together with her/him… Someone who was hired only that day comes to your machine and insults you. If you respond, some inspector enters the stage and writes a report, and you are fired because you initiated a fight in the workplace. If none of these works, the boss closes down the factory and moves it to the adjacent land.

Yet another obstruction for trade unions is the requirement to operate only in legally defined sectors. The determination of which sector a particular workplace belongs to in takes years of lawsuits. For instance, a health union that registers cleaning staff can get an answer from the court that it cannot represent cleaning staff because they belong to the general services sector. Then, when the general services union registers the same workers, another judge (because by chance the actual judge is at hospital that day) can rule “That is a hospital, and therefore it shouldn’t be general services but health services”, thus resetting everything.

Let us now come to the last item, the last option for the union but the first to come into mind when we hear trade unions: strike. Just as the only real medicine is aspirin, the only real union activity is going on strike. The workers block the doors of the factory and use their power coming from production, until the union gets the desired salary increase. When a popular labor peer is fired, a whisper around the machines turns the switches off or shifts down a gear in the production. When the country prepares for a war, the trade unions declare their demand for peace with a general strike. 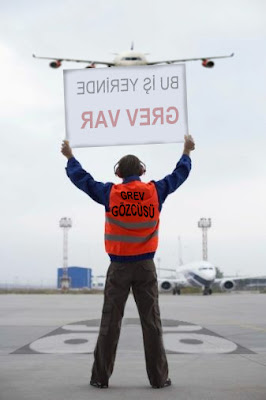 In Turkey, on the other hand, strike is either totally forbidden in certain sectors, or when it is supposedly allowed, it is almost impossible. Only after a disagreement in the collective bargaining process can you go on a strike and you have to declare it 60 days in advance. In the meanwhile, your strike can be forbidden or postponed.

In a country where millions work without social security and where even those with social security live below the hunger limits, only 6 percent of all the waged employees have the right to collective agreement, due to the aforementioned laws. At the end of the day, under the advanced democracy title, we are face to face with a “Collective Labor Relations Law” which doesn’t even have trade unions in its name. According to the news publicized by government sources, when the Social Security Institution records are considered, many trade unions will lose their authority. Instead of using an iron hand in a velvet glove, the government should account for maintaining the military intervention laws for years and for hundreds of thousands of workers who died in work accidents, who have been fired without compensation, and who have been living under the hunger limit.