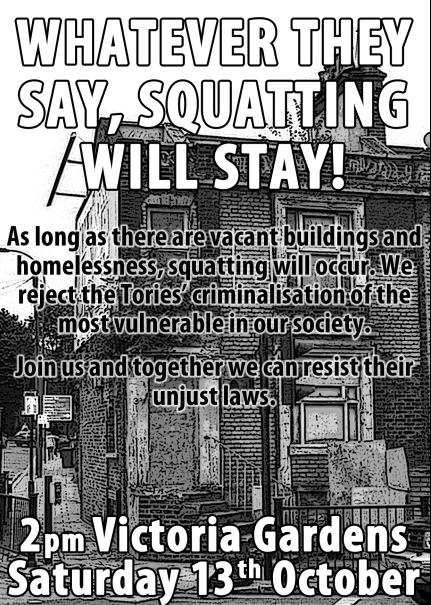 WHATEVER THEY SAY, SQUATTING WILL STAY!

We will resist the squatting ban by any means necessary.

The Squatter’s Network of Brighton is calling for a Mass Squatting Action
on October 13th to resist the new anti-squatting laws. This act is
draconian, unworkable, an attack on our way of living and some of
the most vulnerable in our society. We will not take it lying down.

Around the UK, while increasing numbers are forced to sleep on the
streets, hundreds of thousands of properties are lying empty, decaying and
derelict. We watch property tycoons, speculators and corrupt landlords get
richer, whilst housing benefit is cut and rent goes up.

The UK is facing a massive housing crisis only made worse by the Tory
government, and we – the homeless and insecurely housed – will not stand
for it any more.

As both the birthplace of the bill, and as one of the places where
affordable houses are most difficult to come by, Brighton and Hove has a
special significance in the national and international struggles for the
right to home.

They take our houses, so we’ll take their city!

Everyone to the streets!