There are a number of resources here that can help make support visible. Use them as you wish…..

Thanks to somersetbean for these: 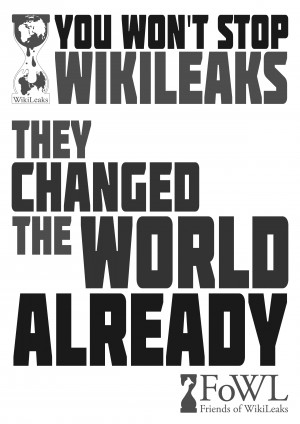 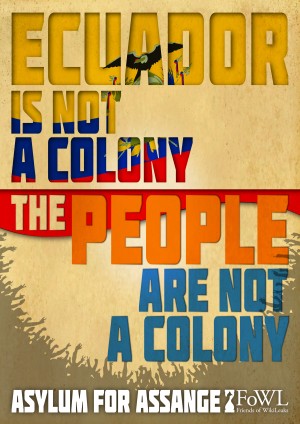 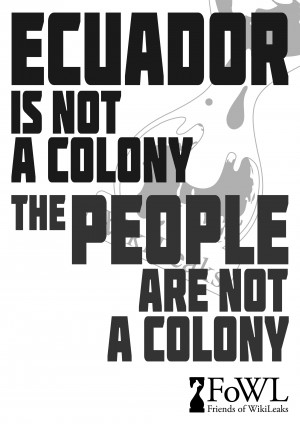 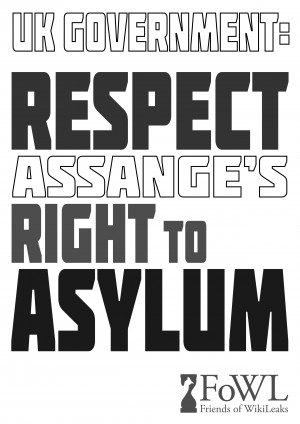 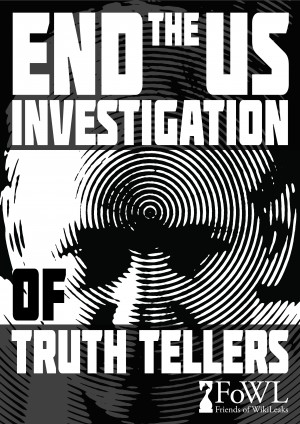 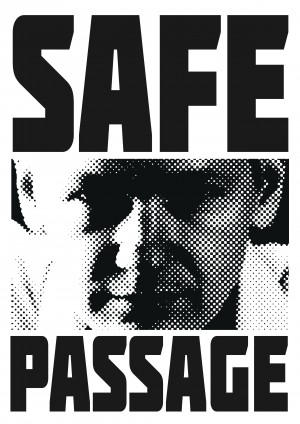 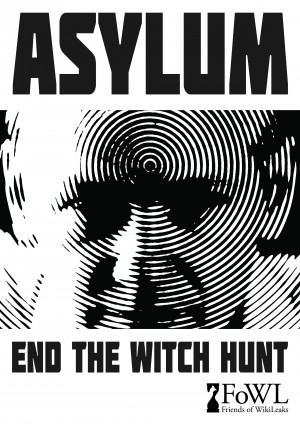 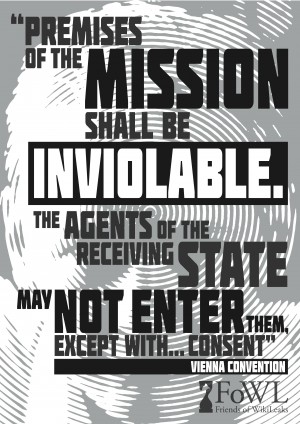 For 4 weeks the world will be watching London as the 2012 Olympics games are played. Global state heads will visit the capital, thousands will be milling around London, the media will be ever present.

With transport making it harder for those outside of the city to join the vigil at the Ecuador embassy and with the UK attention on the games potentially diverting the worlds attention there are some fears that the Olympics will act as a smokescreen, leaving Julian Assange vulnerable to political attack.

It would not take much however to turn this into an opportunity to publicize and promote WikiLeaks. For 4 weeks the UK have the worlds attention. The official Olympic slogan is ‘inspire a generation’ yet this is exactly what Julian Assange has done, and we know where that has got him….

Print off these posters/plackards/flyers and help keep the world watching Julian Assange: 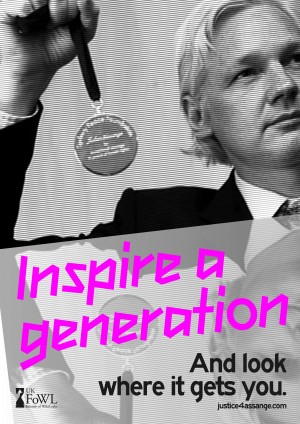 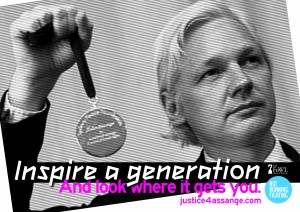 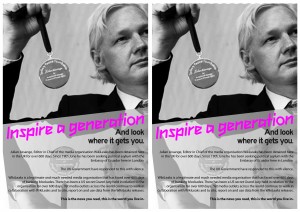 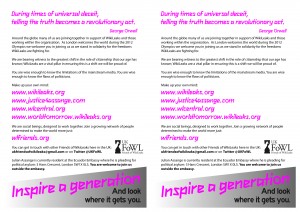 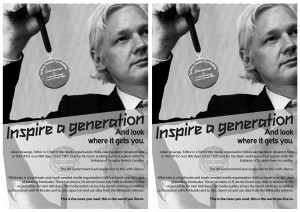 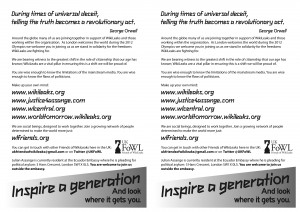 NEW CHRISTINE ASSANGE’S TALKING POINTS FLYER:
Print back to back and have ready to hand out to anyone up for a discussion about the agitation against Julian Assange and WikiLeaks.

Make up your own mind- WikiLeaks fact flyer

FoWL FLYER
Updated with contact details and a list of actions to take, download this double sided flyer and get it passed around- wherever you are, have FoWL with you:

NEW ‘I am not afraid to make up my own mind’ visibility campaign.
Print these off, stick them up somewhere, have your photo taken with them, take them to demo’s and get take photo’s of supporters holding them, post on line. We are here watching. 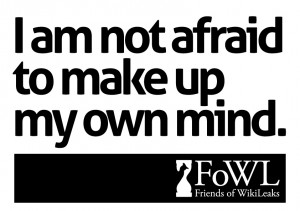 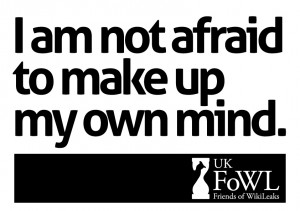 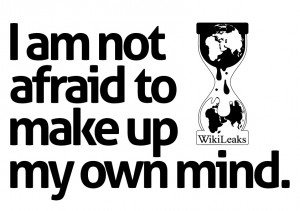 Official FoWL ‘Statement of Support’. Print this off, hand it round, email it, send it off as a press release to your local paper…(link opens as pdf)

Statement of Support for Julian Assange and WikiLeaks- signed (pdf)

Statement of Support for Julian Assange and WikiLeaks.

Friends of WikiLeaks (FoWL) are issuing this ‘Statement of Support’ in preparation for the handing down of the UK Supreme Court judgement on Wednesday 30th May 2012 in the case of Assange V the Swedish Judicial Authority.

FoWL are a global collective of supporters, groups and networks who are united in their appreciation of the work of WikiLeaks. WikiLeaks are an organisation which aims to promote greater transparency and accountability of the powerful structures in our society in an effort to strengthen democracy and uphold global human rights. WikiLeaks serves a complex and multi-faceted function in our society that goes beyond the specific leaks themselves.

The manner in which the case against Julian Assange has been conducted and the factual inaccuracies that have characterised the mainstream media portrayal of both him and WikiLeaks lead us to believe that the case being decided upon at the Supreme Court is not simply about Julian Assange. This case is embedded within a context where Julian, heading the WikiLeaks organisation, has a sealed indictment against him issued by the US. Extradition to the US is likely regardless of the decision handed down on the 30th May. WikiLeaks- a safe and legitimate media organisation which whistleblowers can use to counter corruption, and the work of Julian Assange- a journalist and human rights activist, are being classed as terrorism. FoWL declare this as unjust.

FoWL therefore see a direct link between the treatment of Julian Assange in this case and the persecution of WikiLeaks by the global superpowers. We see this as an attempt at suppressing an important tool for prohibiting corruption. FoWL stand alongside Julian Assange and the WikiLeaks organisation and voice our dissent over the politicisation of our judicial systems.

At this historical juncture we are witnessing a global shift in the role of citizenship- nations are attempting to reclaim the right to hold the governing systems they have democratically elected accountable. History will write back to this moment, in judgement of our global response to the attempted suppression of knowledge, freedom and accountability. It is our future WikiLeaks is defending.

We are here- we are watching.

Print off them off and put them everywhere you can think of. Email them, tweet them, stick one on your blog….. 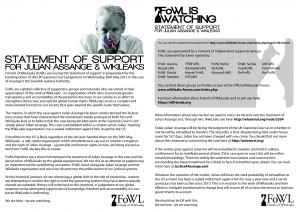 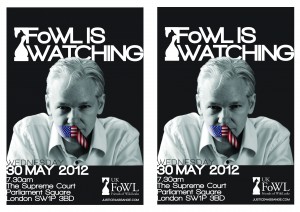 If you are heading to London to show your support make sure you print some of these off…………. 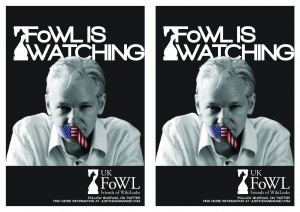 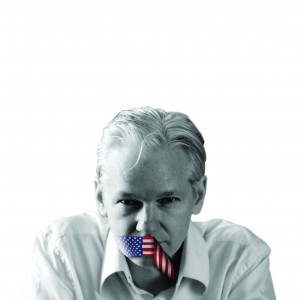 ‘I Am Julian Assange’ facemask

Link here and print off your Julian face mask. Courtesy of FFMFoWL!

If you need any of these emailing over to you, contact UKFoWL@riseup.net