SOUTH LONDON ANTI-FASCISTS: THANKS TO THE MANY

This statement of gratitude is to the many who were on the streets on Saturday, those who in the past week who emailed us offering support, to those who came to our planning meetings. We thank the thinkers who thought deeply and practically about how to stop fascists,  the activists who got arrested and brutalised by the police, to those who organised childcare and those who were there in spirit. We thank those who met up with individuals including from Lambeth SOS/Unison, South London Solidarity Federation andBloomsbury Fightback who without their help would have travelled alone. Also the Animal Rights activists who joined us while dressed as badgers. We thank all of you for your support, the British National Party because of all of your efforts were shown to be a national joke and didn’t even get close to South London.

London antifascists who have been instrumental in the effective resistance on Saturday have published a detailed report which can be read here. 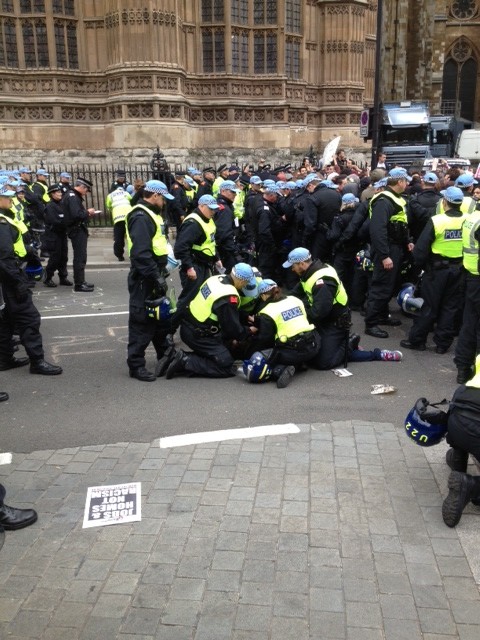 We are disgusted but once again not surprised by the actions of the police, one female antifascist was hospitalised with a broken leg, while 58 other antifascists were arrested because they refused to allow the fascists to march. The arrests with the prepared buses were clearly planned in advance of the protest. We will continue to show solidarity with the arrestees and we will work with Green & Black Cross to continue to provide legal and financial support. We urge all fellow antifascists who are able to donate to GBC, their help has been incredibly important and vital to organising quick and effective arrestee support.

We saw legal observers were punched and pushed out of the way so that they could not record police brutality. This was planned and prepared by the police and we must learn from this experience.

We note that Weyman Bennett from Unite Against Fascism did not cooperate with the police to divide the antifascist resistance, and also many UAF activists joined us in forming defensive lines against the fascists and the police, this solidarity was welcome.

In Woolwich, we thank activists from the Movement for Justice who kept an eye on the local Islamic Centre and spoke with young black people about the current situation. In Lewisham, various antifascists from the local Trade Union Council, Newham Monitoring Project,  and other people from the local community came together to support Lewisham Islamic Centre. The Centre in response held a meal for all who attended on the day.

However, while we defeat the BNP, despite the valiant efforts of antifascists across the country, the English Defence League were able to hold a few unopposed “silent walks” on Saturday particularly in their home town of Luton. They have subsequently raised significant sums of money for their own organisation. We know that at least 13 mosques and Islamic centres have been attacked according to media reports, and many more Muslims have been attacked in the streets.

Our movement has many challenges ahead, we are too white and disconnected from the migrant communities and activists that are directly affected by Islamophobia, xenophobia and racism. Racism, sexism and fascism doesn’t just appear in fascist marches and pitch battles against the police. It happens in the workplace, in the national newspapers, during stop-and-searches, through local councils and the corridors of power in Westminster. Popular racism is endemic in British institutions and mainstream culture. In response to this, we as antifascists must develop a genuine diversity of tactics and a coherent strategy to pull racist ideologies and power structures up from its imperial roots in the British state. Our autonomous struggle is against police brutality, the murder of migrants labelled “asylum seekers”, the countless deaths in custody, the demonisation of Romanians and Bulgarians, and against the inability to leave your home because of the fear of being attacked for being different.

If you are interested in supporting this struggle, we will be holding a debriefing meeting on Monday 10th June from 6pm to 7:30pm in South London. Details will be revealed on our mailing list. Email us to get involved: southlondon-antifascists@aktivix.org