Saturday 28th June 2014 7.15pm W.I. Hall, North Street, Bridport Entry: £3 or less if you can’t afford it Vegetarian soup on sale from 6.45pm Discussion afterwards about art and politics for anyone interested.

*EVENTS ORGANISED BY OTHERS*

‘Robert Potts and his Lost Photo-History of Bridport’

The anti-fascist mobilisation against the South East Alliance demonstration in Cricklewood this weekend was a resounding success. Approximately 200 anti-fascists confronted a mere 40 far-right marchers and prevented them from completing their march, forcing them to turn around and go back the way they came.

The SEA is an even more right-wing splinter group of the EDL that exists in an alliance with all the other tiny far-right splinter groups. Therefore the small number of far-right nationalists in North London on Saturday contained many familiar unpleasant faces from the English Volunteer Force, Casuals United, the March for England etc. Research by London Anti-Fascists correctly anticipated many of the unpleasant characters who would be there.

If anyone had any doubt about the politics of those on the SEA demo there are plenty of photos of marchers doing Nazi salutes and displaying neo-Nazi flags with the emblems of the Greek Golden Dawn and the Celtic Cross. 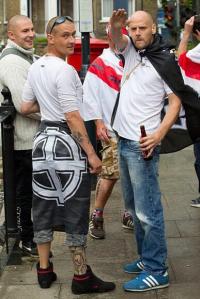 The pretext for the SEA demo was that above a kebab shop on Cricklewood Broadway is the office of a media organisation that supports the ex-governing party of Egypt, the Muslim Brotherhood. In January, the house newspaper of the far-right – the Daily Mail – identified the location as “the centre of operations for Egypt’s once-mighty Muslim Brotherhood”. Hence the people of Cricklewood being besieged by racists – initially by Britain First earlier this year and now by the SEA.

The SEA arrived at Kilburn station and were escorted inside a mobile kettle of police towards Cricklewood Broadway. Anti-fascists assembled near the kebab shop target of the SEA and when they saw the SEA being brought towards them by the police, they moved swiftly to block the road. Headed up by a large ‘No Pasaran!’ banner, the crowd of locals, trade union members and anti-fascists from across London and beyond made sure that they did not pass.

Faced with a large and resolute crowd the police initially stopped the SEA about 20 metres from the anti-fascist crowd. There the fascists remained while plod scratched their heads for a bit, before finally deciding abandon the whole thing. To cheers and shouts of ‘goodbye – don’t come back!’ from the anti-fascists, the SEA were turned around and sent back the way they had come, without ever having got to the supposed destination of their demo. They were taken back to Kilburn station and removed from the area.

The SEA looked pissed off and bored and did not look like they were having a good time. Some of the retreating fash tried to duck into a Cricklewood pub for some relief, but were told in no uncertain terms to get out. Hopefully they’ll learn London is not fascist-friendly and they’ll stop coming back!

Saturday also saw the national conference of Unite Against Fascism at Congress House in central London. Some of the muppets from the SEA demo decided later in the day to go and try their luck there having a go at people attending the conference. They did not succeed in disrupting the conference at all, but lurked about making a nuisance of themselves. Some anti-fascists followed them from Cricklewood and scuffles ensued.

Good work was put in by many anti-fascists in the run up to the demo, leafletting and talking to locals in the area. Hopefully these links will bear more fruit in the future. 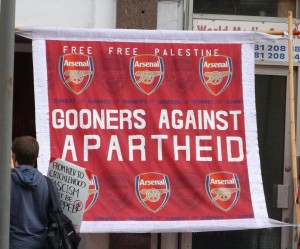 If you were arrested on Saturday or witnessed any arrests or assaults on anti-fascists, please contact GBC with any information.

Well done to all who took to the streets on Saturday to confront the far-right and to show them that they will never get an easy ride in London and that local communities will pull together and unite to keep them out.

A joint action with Dorset socialists, bit of left unity!

The IWW condemns the intensification of immigration raids across the UK under Operation Centurion. We believe that all workers, regardless of their place of origin or legal status, need to support one another in order to fight the common enemy; the present system that upholds the interests of business and other elites at the expense of ordinary working and unemployed people.

The undercutting of the pay and conditions of British workers by migrant labour is not caused by the immigrants themselves but by business owners, managers and government who seek to maximise their profit by forcing working and unemployed people to compete for an ever-diminishing number of jobs. This ‘race to the bottom’ forces us to work harder for less money, and all workers suffer from this – while bosses happily rake in their profits.

The IWW urges British and documented migrant workers not to demonise those without papers but to look after one another at work and create a strong labour movement to promote the interests of working class people of all nationalities – improving pay, working conditions, and collective power at work for everyone. The first step is to join a union.

What is the IWW?

We are the union for all workers, working across the globe to empower
workers to improve their lives together. We are one of the fastest-growing unions in Britain, and we pride ourselves on real democracy and getting results through collective worker-led action. We welcome anyone who works for a wage, whatever their immigration status, because we believe that an injury to one is an injury to all.

Save Kingfisher and SCBU at Dorset County Hospital.