Posted on November 1, 2011 by bristolnoborders

Second Review and Prospects Conference of the Antiracist Movement 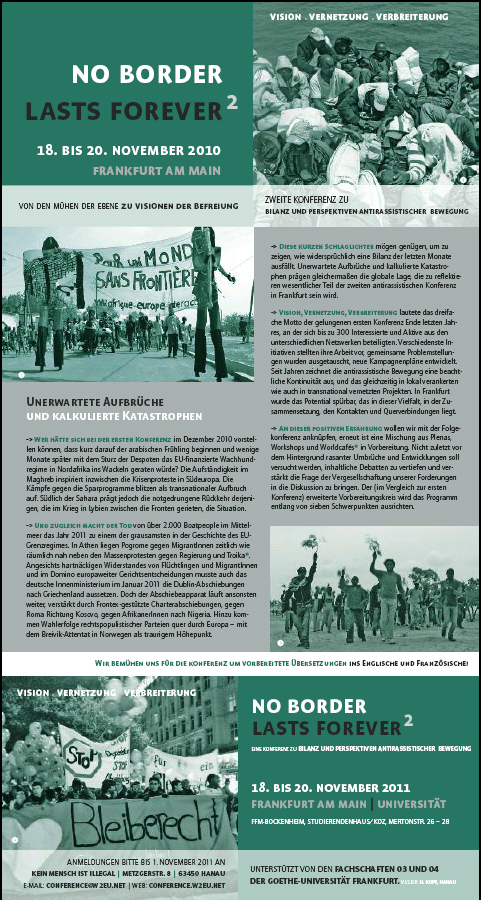 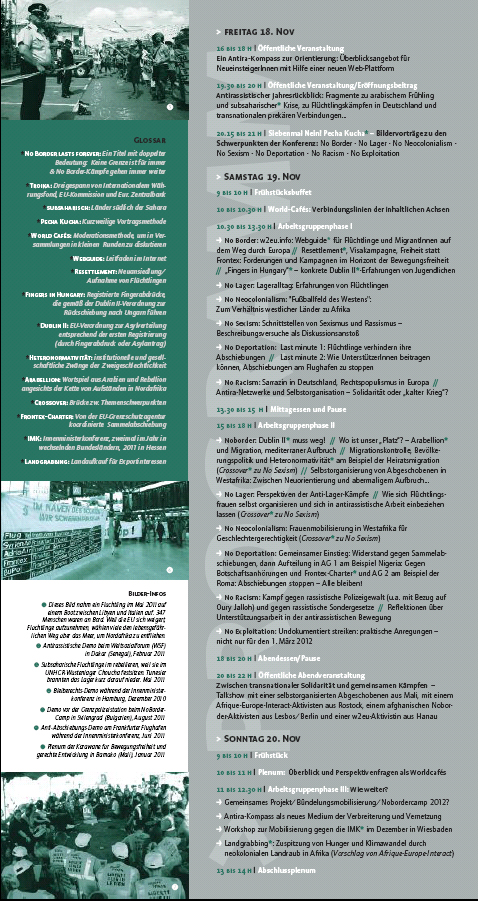 Who would have imagined, at the time of the first conference in December 2010, that shortly afterwards the Arab spring would start and that a few months later the EU-funded “watchdog regime” in North Africa would be shaken with the despots’ fall? The insurgency in the Maghreb has since inspired the economic crisis protests in Southern Europe. The struggles against the austerity programmes come into view as a transnational turning point. However the unavoidable return of those who were caught in the crossfire of the war in Libya marks the situation south of the Sahara. And at the same time, the deaths of over 2,000 boat people in the Mediterranean make the year 2011 one of the cruellest in the EU border regime’s history. Pogroms against migrants are close in time and space to the mass protests against the government and Troika* in Athens. Faced with the persistent resistance of refugees and migrants and following the domino effect of Europe-wide court decisions, the German Ministry of the Interior had to suspend the Dublin deportations to Greece in January 2011, too. But otherwise the deportation machine keeps running, stepped up by Frontex-assisted deportation charter flights, against Roma towards Kosovo, and Africans to Nigeria. Moreover there have been the electoral successes of right-wing populist parties across Europe – with the Breivik massacre in Norway as their tragic culmination.

These short spotlights – here focussed on migration – may be enough to show how contradictory an assessment of last months’ events turns out. Unexpected new beginnings and calculated disasters simultaneously shape the global situation which to reflect will be an essential part during the second antiracist conference in Frankfurt.

Visions, networking, expansion was the threefold motto of the successful first conference at the end of last year, where up to 300 interested people and activists from various networks participated. A variety of initiatives presented their work, an exchange about common problems took place, plans for new campaigns were developed. For years, the antiracist movement has been characterized by considerable continuity, and this with regard to locally based and as well to transnational network projects at the same time. The potential lying in this diversity, in the composition, the contacts and interconnections became perceptible in Frankfurt.

We aim to build on this positive experience with the follow-up conference, again a mixture of plenary sessions, workshops and world cafés* is in preparation. And last but not least it is intended to try and enter, against a background of radical changes and developments, into a more in-depth debate on key issues and bring into the discussion more explicitly the question of how our demands will find a resonance in society. The (in comparison to the first conference) expanded preparatory group will arrange the programme around 7 focus areas.

If you plan to attend, please send an e-mail to the following address: conference@w2eu.net

Further information can be found at: http://conference.w2eu.net/