If you have ever wondered what is wrong with Coca-Cola Company, here is an article to cast aside doubts on its record as a criminal and terrorist corporation along with its harmful effects on health. The Coca-Cola Company has a gruesome past; in the 1930s the company collaborated with the Nazi regime and sponsored its events, including the exploitation of kidnapped civilians in occupied soft drink factories in order to produce and sell their products. Furthermore, the company supported the apartheid system in South Africa, amongst other dictatorships, and paid close attention to the Latin American continent to plague these markets with their products. In other words, the corporation did not only favour these fascist regimes but also profited from the repression and killings of thousands of people within these countries and with war.

The company has not left aside these practices as the reports made by Amnesty International and Human Rights Watch in the past few years clearly indicates. Their abusive human rights record show that the company has been profiting from child labour in El Salvador to extract the sugar needed to give the black liquid its addictive flavour. Furthermore, in Colombia the company collaborated with paramilitary security forces to murder and repress trade unionists, whom held protests to raise wages and improve labour conditions in Coca-Cola factories. Since 2002 the paramilitary security forces in collaboration with killer coke have assassinated more than 460 SINALTRAINAL unionists in Colombia. In other countries such as India, the company has caused pollution and environmental problems affecting local communities, as well as using up its scarce water resources to fabricate its solution.

Referring to the harmful effects on health, Coca-Cola co. has not approved numerous reports formed by respected healthcare authorities, instead they have funded certain agencies to promote a healthy and energetic image of its product. The corporation used advertising techniques of dubious morality, including funding the American Academy of Paediatric Dentistry and suppressing a World Health Organisation Report on healthy eating. Don’t be deceived by coca-cola adverts and their misleading website (http://www.beverageinstitute.org/en_US/pages/ahl-beverages-bone-health.html) on the “real facts” of the killer liquid. Numerous independent reports investigated by the WHO and American nutrition journals clearly indicate that sparkling drinks, amongst the most harmful is Coca-Cola, cause obesity, diabetes and tooth decay.

These abuses amongst other accusations have denigrated the company’s bubbly image and have sparked movements to terminate the profits of killer coke. It would be irresponsible and complicit on our side as citizens to stand back and not protest against these atrocities. As citizens and consumers one of the few actions we can take to stop coke is to boycott it on a personal level, within institutions and why not, nationwide. It should be clear to everyone that when we buy a bottle of coke we are aiding killer coke in its exploitation, torture and murder of workers in factories and further the damaging of local communities in developing countries. Don’t collaborate with killer coke. Boycott it. 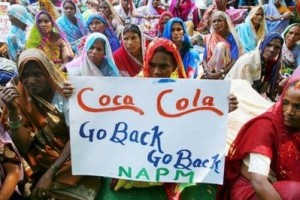