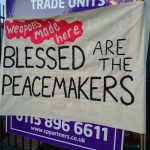 MiChA banner outside Heckler and Koch 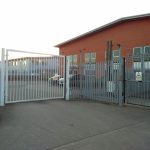 Unit 3, premises of Heckler and Koch in Nottingham 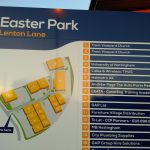 ‘Set in the middle of Easter Park industrial park, sandwiched between a church and the university, Unit3 remains blank on the notice board. But as you can see from the high fences, razor wire and security cameras they are certainly there, and in the  business of producing assaults rifles and sub-machine guns to be exported to Bahrain, Qatar & UAE.
Witnessing at the entrance to the site at 5pm meant commuters on the tram could see our banner, and there were a number of pedestrians and cyclists using the pathway too.’

Heckler & Koch is a German-based weapons company which operates in the UK under the name NSAF Ltd.

It describes itself as a ‘world-wide leading company in small arms production’ and has been supplying weapons across the globe for the past 60 years, including pistols, assault rifles, submachine guns and sniper rifles. It currently manufactures the British Army’s primary assault rifle – the SA80.

In the run up to and during the Arab Spring it applied for UK arms export licences to Bahrain, Qatar, UAE and Oman.

Fr. Martin was in court on 28th February over a fine, resulting from a protest outside the DSEI arms fair in 2009. He was given 28 days to pay.

Martin said: “I am continuing this objection as an act of solidarity with all those who suffer injustice and violence as a result of the arms trade.” Friends including the Passionist Provincial Fr. John Kearns came to the court today to support Fr. Martin.

In case you missed it, here he is speaking outside the court.

It was covered by the Birmingham Mail here