Original expose from Plane Stupid, July 2008
(Note: C2i was also where Becki Todd started out. They have since disappeared. Links from the following statement have been removed as they are no longer active.)

Since late summer 2007, an employee of a corporate espionage agency has been trying to infiltrate Plane Stupid. Toby Kendall, who works for C2i International, a “special risk management” firm, thought he was undercover in our London group, gathering information on what we’re up to. Instead we’ve been feeding the ‘revenge movie’ obssesed mole false information, which he’s been reporting to the aviation industry for months.

After last year’s Camp for Climate Action new activists began turning up to London Plane Stupid meetings. Most were perfectly normal people angry at the expansion of Heathrow airport. But one newbie didn’t fit in with the rest – Ken Tobias, an Oxford graduate who claimed to have just got back from China. Something about him just wasn’t right.

We carried out a quick background check. Although Ken lived in London, he wasn’t on the electoral register, nor on the records of the rugby team he claimed to have played for. We fed him false information about a fake action and were told by an industry insider two days later that security at airports around the country had been alerted. The ludicrous idea of a Climate Camp in Hyde Park soon ended up in the papers, as did the content and locations of meetings he’d attended.

We had hit a dead end. We couldn’t identify or find any record of him, so three of us met Ken in a Japanese restaurant and asked him if he was a spy. He denied everything, claiming that he’d lost his wallet and had no photo ID. We secretly recorded the meeting and took a photo of him leaving to show other groups – but still had no concrete evidence of who he was working for.

Then came the a breakthrough – a contact at Oxford University recognised a photo we’d taken. Our spy wasn’t called ‘Ken Tobias’, but Toby Kendall – an Oriental Studies student from Wadham College. A quick google search revealed a Bebo page with a photo. Snap! It also took us to Linked In, a high-flying corporate networking site, where ‘Ken’ claimed to be an analyst at C2i International, working in “Security and Investigations“.

C2i are an interesting bunch. According to their website, “C2i’s specialists are drawn from commerce, the military and government agencies. They include internationally recognised authorities on special risk management, industrial espionage and law enforcement, and senior personnel from Special Forces and Special Operations, London Metropolitan Police.” Professional spooks – just like those which infiltrated the McLibel campaign and the anti-roads movement in the 1990s.

Take a good look at the photo above, and those in our mole hunt gallery. If you see ‘Ken’ at your meetings, be warned. You could be being watched by bungling spooks… 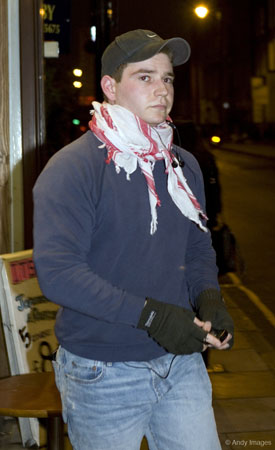