“Identity England” – Generation Identity rejects back for the third time 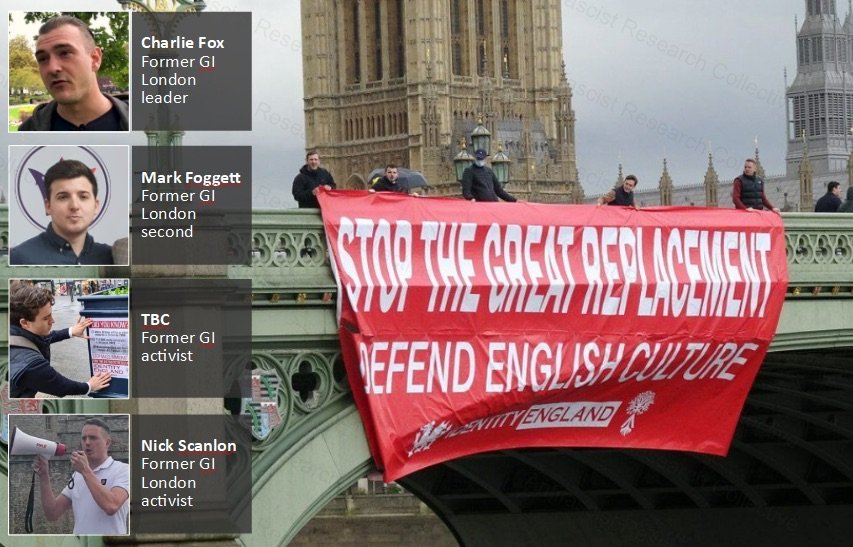 Last month, a “new” Identitarian group launched called “Identity England“… although they’re not that new are they? Identity England is formed from the remains of “The Identitarian Movement” or IM (dissolved in January 2020) which formed from the remains of “Generation Identity UK” or GI in 2019 making it the third attempt by mostly the same people at keeping an identitarian group running in the UK.

It appears Identity England are already struggling to be a group in their own right, given their membership is heavily crossed over with the likes of For Britain and Patriotic Alternative – and almost every activist is a former GI/IM member.

To fully contextualise Identity England we should seek to understand why Generation Identity UK and the Identitarian Movement collapsed.

Generation Identity UK got disaffiliated from the wider European organisation after leader Ben Jones platformed Neo-Nazi Millennial Woes at the GI UK conference despite the objections of European GI leaders. This led to the rebranded “Identitarian Movement” which, without European backing and filled with infighting, failed to ever gain traction. The group dissolved when Ben called a meeting to discuss his “disillusionment with the patriotic right” – ex-members however, blame Ben for his attempts to move the group away from the white supremacist “great replacement” rhetoric (and oddly, they also take a huge issue with his partner for supporting Extinction Rebellion. No, really. It’s a big deal to them.)

The group class themselves as “an actions focused group guided by the idea of meta politics and changing the political culture“. This strategy has so far translated to banner drops, stickering and poorly shot action videos with slick logo animations layered in – exactly the same sort of output as GI.

The leadership and organisers are composed currently of Charlie Fox as leader and Mark Foggett as deputy, a direct copy paste from the London branch of GI. A little bit more about them below.

So what can we expect from Identity England? If their launch is anything to go by, probably more of the same. Stand by for more of the banner-and-speech flash demos, more haircut-and-gilet soldiers milling around behind Charlie Fox as he whinges about a non-existent white genocide, and more attention-seeking stunts that aim to stoke tension and incite racial hatred toward the Muslim community.

Since the launch of Identity England, another group has emerged on social media called “Identity Scotland”. From this, and also considering the old GI structure, it would not be too far to suggest that we’ll see Identity Ireland and Identity Wales spring up in the near future – that is, if enough goons can be resurrected from an already split and reeling collection of British based identitarians. Assuming that Charlie can muster up a regional lead, second in command and a couple of banner holders for the job, expect a mediocre banner launch from Identity Scotland soon.

While we can safely say that Generation Identity were smashed in the past (let’s not forget the series of embarrassing infiltrations and an even worse conference that was interrupted by anti-fascists), it would be dangerous to assume that its former members no longer pose a threat. Through research, it is clear that their members and supporters are very much kicking around in the fash sphere – beyond this new venture, they continue to pollinate other ethno-nationalist groups, environmental groups, and more insidiously, smaller regionalist political parties who are much more centrist in their politics.

Therefore, as we continue to watch Identity England, we will also shortly release more details on the old faces of Generation Identity. Keep an eye out for them popping up where they’re not wanted.