The Greek Crisis: Unspoken Consequences: From our Athens Correspondent

If anyone were interested in researching the mechanisms of the state in action, Greece would have been a primary candidate for a case study. The public domain from the mid seventies to approximately2008 had been the largest in Europe, whilst the realm of society and politics has been rendered  accordingly sterile by a two-party system described by Slavoj Zizek as a Pepsi-Coca Cola government – established to imitate the muted environment of the political scene of the United States of America – under the careful vigilance of PASOK and New Democracy. It is of no coincidence therefore, that the gradual unfolding of the crisis and its consequences were first brought into the open in a nation so extensively influenced by the state domain.

With the public sector accounting largely for health, employment, education and many other aspects of everyday life – though the quality and source of funding was at times questionable – the hybrid state-capitalist system has been systematically rendered vulnerable to neoliberalism’s destructive competitiveness.

Though Greece’s unemployment, social unrest and economic disintegration have been the most frequently discussed topic in connection with the Eurozone, it is now, three years and two hundred and forty billion euros worth of loans into the crisis, that the most severe symptoms of the economic crisis are coming to the surface. Public servants and some elements of the private sector have suffered a series of reductions in wages and bonuses, whilst the state-owned health, education and transport sectors have been largely stripped of their subsidies, resulting in one in five workers losing their job so far. From an external perspective, investment has been deterred and tourism, one of Greece’s main sources of capital, has been suffering an economic embargo by tourist offices worldwide.

One of the later, and very significant, indicators of a system in crisis has been the recent polarization of the political scene after the 2012 elections, echoing patterns observed during the Weimar period in Germany. For the first time in Greece’s history as a modern state, the oligopolistic structure of political governance has deteriorated following the dramatic decline in PASOK and New Democracy’s influence. 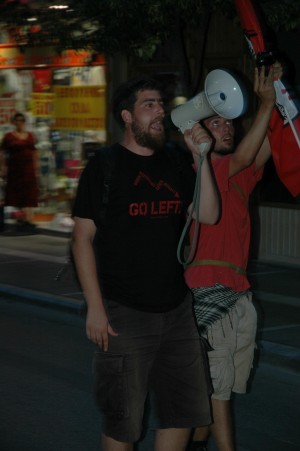 SYRIZA, the Coalition of the Radical Left, has seen a surge in popularity, whereas the right has taken a step closer to the realm of neo-Nazism currently represented by Golden Dawn. Caught between the threat of the Left Current of SYRIZA, composed of elements of radical leftism, and the possibility of a forced default at the hands of the European Union, the prime minister has gradually adopted policies more and more akin to those of the extreme right.

In a defence mechanism featured commonly against the domain of the left, the first act of the current government’s application of divide-and-conquer policies has been to dilute the fronts of class warfare that are becoming ever more distinct, as well as draw support from the far right with the unifying illusion of national identity. The topic of immigration has presented itself in the form of the ‘Xenios Zefs’ project, under which immigrants who are found to be without the correct paperwork are rounded up and sent to police training centres in the north of Greece.

In an attempt to target the mobilising populace, doctrines consisting of  ‘the nation-state, religion and patriarchal family’, three historically oppressive concepts, are being continuously propagated and enforced as a means of restoring the traditional values of national pride in the face of periods of difficulty. (This is also seen in Britain through Cameron’s ‘we are all in this together’ approach.) State-owned universities on the other hand, typically known to cultivate and more radical younger section of society, have been starved of teaching personnel and basic materials such as textbooks and examination boards.

The result has already begun to force political consciousness to choose between a conforming social democracy or revolutionary insurrectionist approach, the latter of the two being more easily compartmentalised with Greece’s increasing turn towards becoming a police state. Warnings that the left embraces bankruptcy and the destruction of society, has been increasingly present in the areas of media and propaganda. The Golden Dawn has benefited greatly from this evolving environment and is now threatening to show its true identity (1) and leave the parliament which it claims to resent and take to the streets.

Paying tribute to elements of fascism, from which it also draws elements in its programme,  it is laying the foundations of its future by setting up groups and networks in every part of Greece and taking policing into its own hands, often forcibly clearing out squats, attacking immigrants and philanthropic organisations and escorting citizens to shop and collect pensions.

An economic crisis in a capitalist neoliberalist system works in three stages. Firstly, it dismantles the industrial sector to bring the nation down to its knees. It then wipes out the workforce that generates production and consumes, shattering the middle class. Finally, it impregnates the staggering economy with high interest loans to shackle it in its current state and drain its capital. Greece is now left with two choices, to inextricably bind itself to a contract with no expiry date that feeds it enough to survive and no more, or default and suffer tremendous socio-economic consequences and an unpredictable future. If it chooses to follow the second, it will need a new system and new allies. The following months will tell the tale.

(1) A phrase used at their recent political gathering in Thermopylae

Golden Dawn (Hrisi Avgi): Headed by Nicholaos Michaloliakos, it is an extreme-right party, drawing elements from both Nazism and Fascism. Currently in parliament

New Democracy (Nea Dimokrateia): Headed by Andonis Samaras, is a conservative centre-right party which aligns itself with the European Union and the policies of the IMF, currently the leading party.

PASOK (Panellinio Sosialistiko Komma): Panhellenic Socialist Party, previously headed by Georgos Papandreou, is a social-democratic party that was one of the two participants in Greece’s two-party system, which headed the austerity programme in Greece.

SYRIZA (Coalition of the Radical Left / Synaspismos tis Rizospastikis Aristeras): Headed by Alexis Tsipras, is a platform party consisting elements of social democracy, and in its Left Current a combination of euro-Communism, left-Ecologism, Feminism, Leninism, Marxism, Maoism and Trotskyism. Currently the opposition party.