This seminar was given by the Free University, Dundee at the recent Dundee Together Against Racism and Fascism Festival. 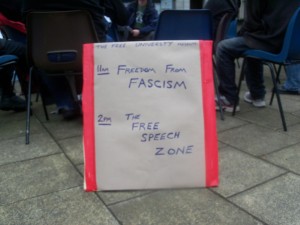 The title of this seminar suggests that freedom and fascism are opposites. We could spend a lot of time tied up in defining freedom so instead we’ll concentrate on defining fascism. Lots of people have given definitions and we will look at two. The first is from Noam Chomsky ; “fascism is state organised economies run in cooperation with big conglomerates“. This could be called macro-fascism and is the basis for our first seminar.

The other definition is from Wilhelm Reich who defined fascism as;  “The organised political expression of the average man’s character.” This brings the issue down to the individual, can be called micro-fascism, and is the basis for the second seminar.

Under fascism, the state controls the population in the interests of big business.

Where does the word fascism come from? The word is derived from the Latin fasces meaning bundles. In ancient Rome bundles of rods with an axe bound up in the middle were the symbols of authority of certain of the higher magistrates.  This symbol was adopted by the original fascist movement which emerged in Italy from the chaos and discontent felt at the end of WW1. This symbolism is also heavily used in the USA – above the door to the Oval Office for example.

It was in March 1919 that Musolini founded the first Fasci Di Combatimento (combat groups) and the movement contained in the most part  ex-servicemen like Benito Mussolini himself, a former Socialist activist who became increasingly nationalistic during the war.  Their early aim was to combat communism and a military style of organisation was adopted.

They began with early street-fighting tactics that grew to the point at which they could march on Rome and overthrew the government. Once in power the more left leaning policies towards republicanism (a state without royals) and anti-church (seen on the left as another institution for controlling the people) were quickly dropped. They introduced new electoral systems that created a dictatorship which prevented their new government from being overturned.

1. The Italian fascist government controlled workers through state trade unions and the motto No Discussion, Only Obedience was adopted, in relation all spheres of life (all home, school and government decisions) with a Leader cult .

2. They developed a Corporate State (in which the government control the social and economic conditions to help business thrive), a system of totalitarian capitalism.

3.  Although they embarked on a militarisation programme to promote their imperialist ambitions in  North Africa, the Italian fascists displayed little anti-Semitism, and avoided the master-race ideology found in Nazism.

The rise of the Nazis in Germany is something we have all been brought up with –  Master race, gas chambers , Nuremburg rallies etc – but let’s go back to the immediate post WW1 period, where the parallels with Italy in are clear. Discontented soldiers who had found a comradeship in war and for whom war had become their career formed bands of militias, ‘The Freikorps’ (Free Corp), which were used by the government to crush left-wing revolutions and revolts in Berlin, Munich and the Ruhr. The Freikorps adopted the swastika as early as 1920 for the attempted coup known as the Kapp Putsch, rejected government by the elite sections of society, whist violently opposing all forms of socialism or democracy. Many Freikorps veterans became the armed wing of the Nazi Party, the SA under Rohm.

The early National Socialist German Workers Party adopted anti-capitalist rhetoric, claimed to draw a distinction between creative industry and rapacious finance (characterised by the Jew), and combined this with an intense German nationalism. Indeed many within its ranks did have genuine anti-capitalist beliefs e.g. the Strassers and even Goebbels for a time. However the support given to Hitler by big business led to an internal power struggle in which the socialistic elements were purged.

Why did big business back Hitler? Pre WWI, Germany had economic problems due to their monopolised capitalist system, and these did not cease after the war. During the 1920s (Weimar period) foreign capital kept Germany afloat, but when the recession hit in 1929 the Western (American) capital fled. This left Germany in its original dire economic circumstances. The Nazi’s economic goal was the return of profitability for German business interests, rather than the interests of foreign capital that had fled before. This was achieved by;

1. breaking the freedom of labour to organise through crushing the trade unions

3. the militarisation programme to achieve a base for imperial expansion. (War Keynsianism)

The development of a war economy creates a climate in which conscription of labour and other anti-democratic measures of social control appear acceptable (parallel anti-terror law). These measures further strengthened the position of the controllers of industry and finance. Indeed all war production, then and now, is effectively a public subsidy to big business interests.

The persecution of Jews and other minorities in this period were, arguably, merely a way of deflecting attention from the failure of the Nazis to fulfil their promises to their supporters in the middle classes, and cover up their promotion of the interests of their backers – big business.

Post-Civil war Spain too followed a similar pattern and it was argued by the Veblinite school of economists that all major economies developed fascist tendencies in the thirties with state coordination of unions and corporations and a big role for big business.  Everybodys fascist – it just takes different forms depending on the cultural patterns of the individual country.

This system then continued into wartime and Chomsky has argued that the USA, for one, then continued this type of economics in the post war period  by

The state then became a channel for funnelling public money into private hands especially the arms and related industries. 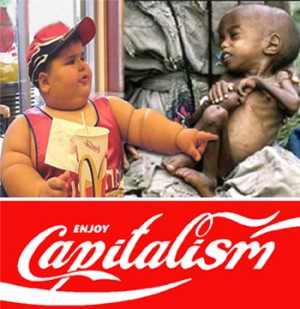 Now in the present day, at least from the time of the rise of the neo-liberal global hegemony from the early eighties, nation states have become less important as global corporations especially in the financial sector dictate economic terms through the vast and immediate transfers of money across the world seeking high interest, low tax environments and compliant workforces. The super-rich elite sit in their tax havens counting the $30trillion they’ve stashed away.

The Neoliberals claimed that we would be best served by maximising market freedom and minimising the role of the state and that the free market, left to its own devices, would deliver efficiency, choice and prosperity. However the state and the market are not, and possibly never have been, in perpetual conflict.

Rather , they have increasingly united around the demands of  the giant corporations. Big business has recruited the state to provide the essential prerequisites of their global power  interests.

In Britain corporations lobbied for privatisation programmes that replaced public monopolies with private ones. They also persuaded the government to create hybrid schemes eg PFI that guarantee state funding for business.

In the US, giant corporations persuaded Congress to remove the key regulations governing auditors and the banks leading to the financial crisis.

Big business has used its power to persuade the state to let it keep dumping its environmental (and social) costs on the rest of us and  with the financial bailout they dumped the economic costs too. As in Nazi Germany, and arguably post-WW2 USA, global profitability is also maintained by ;

2.  increased monopolies – this time on a global scale

As George Monbiot, no anarchist, has recently pointed out, the neoliberal programme has closed down political choice and diminished democracy. http://apps.facebook.com/theguardian/commentisfree/2012/jul/30/economic-ruin-super-rich-totalitarian-capitalism?fb_source=aggregation&fb_action_types=theguardian:agree  If the market, as the doctrine insists, is the only valid determinant of how societies evolve, and the market is dominated by giant corporations, then what big business wants is what society gets. “A programme that promised freedom and choice has instead produced something resembling a totalitarian capitalism, in which no one may dissent from the will of the market and in which the market has become a euphemism for big business. “

It may be a bit more subtle and somewhat less brutal – depending on which part of the world you live – but isn’t this fascism – on a global scale. Indeed can fascism be defined as business as usual but with added brutality? Is it a necessity for the global elites when capitalism runs into difficulties and popular dissent increases?

If we are all fascist at a global economic level, are we all fascist at a personal level too. After all no system can exist without some measure of popular support. Are fascist tendencies present in all of us and are they perpetuated and if necessary amplified by the system of hierarchical control which is always in operation – in every country, in school, at work, and in the family? This is the focus of the second part of this seminar .