Text from Schnews (cause they’re funnier than we are):

Russian avant-garde punk agitators Pussy Riot have been banged up. A Riot grrl inspired feminist octet they shot to fame as bizarre cheerleaders for the anti-Putin protests last winter. Clad in multi-coloured balaclavas they grabbed attention with a series of guerilla gigs, including a surprise appearance in Red Square in January where they performed their signature tune “Revolt in Russia”.

Their last excursion, an improvised ‘punk prayer’ in the pulpit of a cathedral demanding that the Virgin Mary chase Putin out of office and denouncing the collusion of the Russian Orthodox hierarchy with the political elite. Two of them, Nadezhda Tolokonnikova and Mariya Alekhina, have been charged with hooliganism and incitement to religious hatred and are threatened with seven years in jail.

On Wednesday 14th they were denied bail (meaning they will spend at least another six weeks inside) and a solidarity picket outside of the court in Moscow was attacked by fundamentalist Orthodox Christians. They have gone on hunger strike in custody and there is an international campaign to release them (there is a petition for their release).

On Thursday a third woman was arrested and interrogated by Russian Police. For the latest on their case see:

For a flavour of the girls in action http://www.youtube.com/watch?v=CZUhkWiiv7M 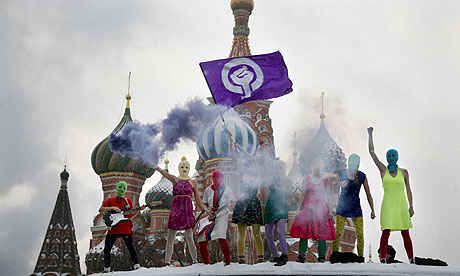 London Anarchist Black Cross, is a collective set up with the aim of supporting prisoners: political prisoners, people in detention centers or just people fucked over by the capitalist system.
View all posts by londonabc →
This entry was posted in Call-outs and tagged balaclava, hunger strike, punk, punk prayer, pussy riot, russia. Bookmark the permalink.