Thaer Halahleh and Bilal Diab were yesterday petitioning the Israeli High Court to end their administrative detention orders early as both men, after 70 days of hunger striking, are at risk of death and being apparently denied medical attention.

Their petitions were rejected, the High Court judges stating in their decision that the hunger strikes do not provide reason for releasing Thaer and Bilal from administrative detention or reducing the period of detention.

Thaer Halahleh and Bilal Diab are just two of the estimated 2,000 Palestinian hunger strikers, who are demanding an end to administrative detention, isolation and the other punitive measures taken against the prisoners including the denial of family visits and access to university education.

Since the hunger strike started the IPS (Israeli Prison Service) has taken punitive measures that the Palestinian Council of Human Rights Organisations (PCHRO) is greatly concerned about. These measures include solitary confinement, daily fines of up to 500 NIS (€100), confiscation of salt for water, the denial of electricity supply and random cell and body searches.

More information on the hunger strikers as well as lists of Palestinian prisoner can be found here: Adameer Prisoner Support and Human Rights Association. 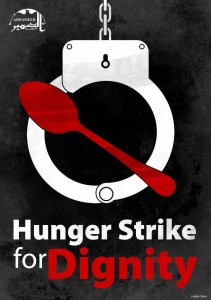 London Anarchist Black Cross, is a collective set up with the aim of supporting prisoners: political prisoners, people in detention centers or just people fucked over by the capitalist system.
View all posts by londonabc →
This entry was posted in campaign, news and tagged bilal diab, hunger strike, israeli high court, palestine, palestinian, petition, rejected, thaer halahleh. Bookmark the permalink.