Recently John Bowden has been having trouble with a social worker, Brandon Barnett, lying about him in reports to the Parole Board. You can find background to this on Leeds ABCs page here and a later update here.

John has already been recommended for transfer to an open prison,  making it seem a great deal like he is being punished for his political views and militant stance.

He asked then that people write to the chief social worker to express their support for John and ask why Brandon Barnett was still employed after such obvious lies.

John’s complaints and exposure of the behaviour has led to further repression. Now he really needs people to write.

If you didn’t before then do it now.
If you already have, then why not do it again. 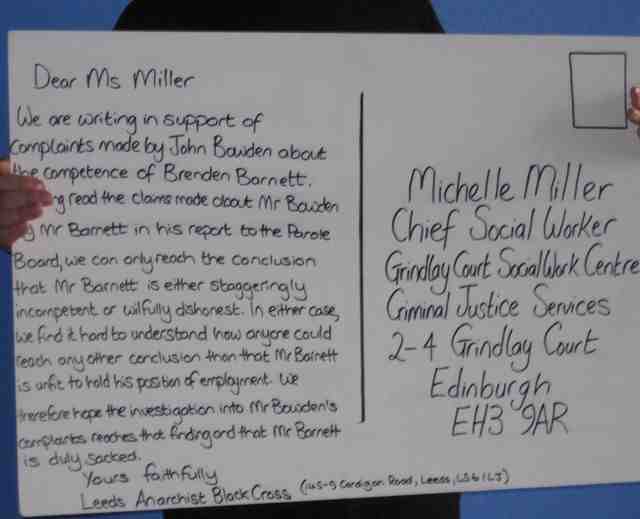 For just £2.16 postage you could even send a card like the one pictured above, which Leeds ABC posted on Saturday 21st April.
As always, John welcomes letters:
John Bowden
6729
HMP Shotts
Cantrell Road
Shotts
Scotland
ML7 4LE.

London Anarchist Black Cross, is a collective set up with the aim of supporting prisoners: political prisoners, people in detention centers or just people fucked over by the capitalist system.
View all posts by londonabc →
This entry was posted in Call-outs, news, prisoner support and tagged brandon barnett, call out for letters, john bowden, social worker. Bookmark the permalink.