Demonstrate with us on the Day of Action for John Bowden 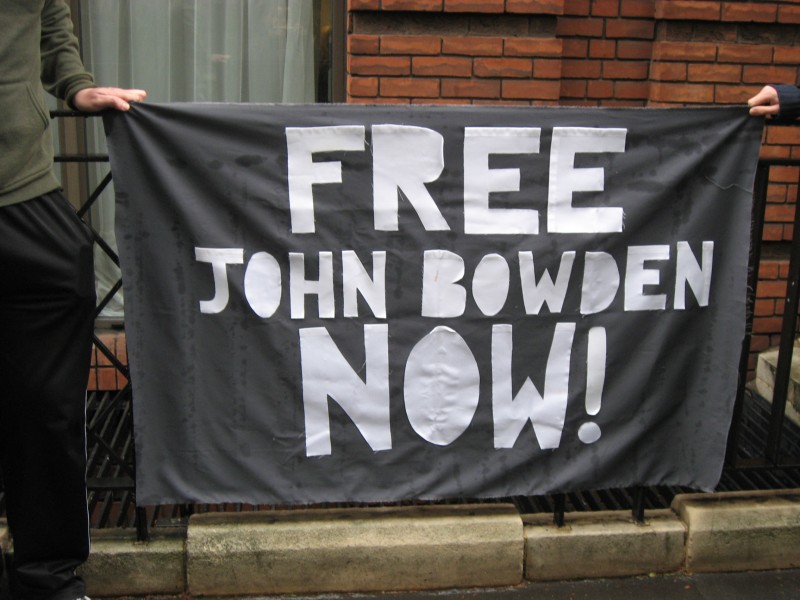 June 11th is a Day of Action in solidarity with prisoner John Bowden. John has been incarcerated in various prisons since 1982 for murder and for much of his life before that. John has been an outspoken advocate of prisoner’s rights and human rights abuses on the inside. As a result, John’s parole hearings have been repeatedly sabotaged by the criminal justice system and he has been the victim of brutal treatment and physical assaults in an as yet unsuccessful; attempt to demoralise him and shut him up.

In 2007, social worker Matthew Stillman, alleged that the Anarchist Black Cross, who support John’s struggle, are a ‘terrorist organisation’.
However, a sustained campaign and Day of Action at the time was successful in exposing Stillman’s lies and professionally discrediting him. More recently, prison hired social worker Brendan Barnett has repeatedly told lies to the Parole Board in a further attempt to sabotage John’s release.

John should have been paroled by now and it has actually been recommended by the Parole Board two years ago that John be moved to an open prison. This recommendation has been ignored by the Scottish Prison Service. John has been victimised by the criminal justice system as a result of his outspoken complaints of prison conditions and his politics. Please join us demonstrating outside the parole boards offices on the 11th of June and show your support for John. If can’t make it then please consider writing a letter of complaint or phoning/faxing one of the following people and sending a letter of support for John!

If you’ve already done this, do it again!

John’s many statements can be read here:
https://network23.org/londonabc/statements-from-people-in-prison/

Letters and cards of support to John at:
John Bowden,
6729,
HMP Shotts,
Cantrell Road,
Shotts,
Scotland,
ML7 4LE.
You can also send e-mails to John (or any other prisoner) via:
http://www.emailaprisoner.com

Monday 11th of June was day of action in solidarity with long term anarchist prisoner John Bowden. In response to the recent attempts of prison-hired social worker Brenden Barnett to
sabotage John’s parole (see above), London ABC called a demonstration outside the parole board’s office at Grenadier House, Horseferry Road. The front desk said they wouldn’t help us, so we stood outside with a banner, flyering passers by and asking to speak to someone from the parole board about John’s case. In the end we managed to speak to someone. We really hope this shows the parole board and prison ‘services’ that there are people on the outside who are watching what they are doing. Because we are.

London Anarchist Black Cross, is a collective set up with the aim of supporting prisoners: political prisoners, people in detention centers or just people fucked over by the capitalist system.
View all posts by londonabc →
This entry was posted in campaign, Demonstrations and tagged 11th june, day of action, grenadier house, john bowden, parole boards office. Bookmark the permalink.