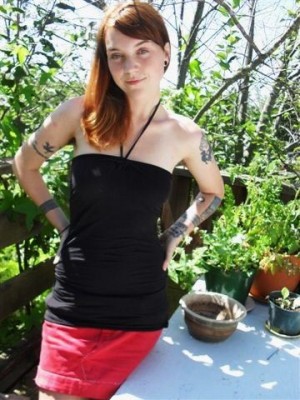 On July 19 our friend Kelly Rose Pflug-Back was sentenced to 15months in jail followed by 3 years of probation for her involvement in the Black Bloc at the Toronto G20. The crown stated that this sentencing was meant to send a clear message that the actions of the Black Bloc would not be tolerated. Kelly spent much of the preceding year under house arrest and strict conditions, designed to isolate her from the movement and disable her from doing the work she believes in. Yet through it all Kelly has remained active, strong, and defiant!

On August 5, we are asking you to organize events in your communities in support of Kelly! Letter writing events are already being organized in Toronto, Victoria, and Vancouver. Fundraisers are also needed to keep her in touch with her loved ones. The crown wishes to send a message and we want you to help us send a message back; Kelly will never be forgotten, and we will never give up! May every letter to Kelly be a love letter to resistance! Let her imprisonment be a catalyst for action!

A facebook group has been set up to help Kelly’s supporters connect and coordinate their efforts, and to keep people updated on any new developments or needs. Please let us know if you are organizing public events in solidarity with Kelly. http://www.facebook.com/groups/126655617477527/

To learn more about Kelly and what she has been through check out any of the following:

Every prisoner Is a Political prisoner: A Memoir http://www.crimethinc.com/blog/2012/07/23/every-prisoner-is-a-political-…

Kelly Pflug-Back sentenced to 15 months for Black Bloc attacks in Toronto http://anarchistnews.org/content/kelly-kelly-pflug-back-sentenced-15-mon…  A book of her poetry has also just been published called These Burning Streets http://www.combustionbooks.org/products-page/poetry/these-burning-streets/

London Anarchist Black Cross, is a collective set up with the aim of supporting prisoners: political prisoners, people in detention centers or just people fucked over by the capitalist system.
View all posts by londonabc →
This entry was posted in Call-outs, campaign and tagged black bloc, canada, g20, kelly Pflug-Back. Bookmark the permalink.