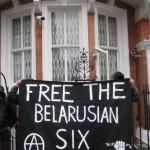 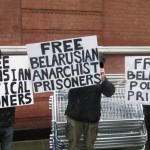 On a very rainy day around 15 people attended a demonstration at the Belarusian embassy called by the Anarchist Federation & London Anarchist Black Cross. On Sunday September the 23rd the embassy was open to receive overseas votes for the bogus elections.

The demonstration was in support of six anarchists; Ihar Alinevich, Mikalai Dziadok, Artsiom Prakapenka, Pavel Syramolatau, Aliaksandr Frantskievich and another activist Jauhen Vas’kovich were arrested over the autumn of 2010 and the winter 2011.

They were accused of various actions including participation in an illegal anti-militarist demonstration, physical attacks on symbols of capitalism, an attack on a KGB headquarters and hacking into government websites.

London Anarchist Black Cross, is a collective set up with the aim of supporting prisoners: political prisoners, people in detention centers or just people fucked over by the capitalist system.
View all posts by londonabc →
This entry was posted in Demonstrations and tagged anarchist federation, belarus, election, embassy of belarus, political prisoners. Bookmark the permalink.