Roll up, roll up! This huge prisoner support benefit is coming to North London!

London Tattoo Circus is a 100% benefit event in solidarity with all who find themselves imprisoned for their ideas and actions within the prison society. All proceeds go to related active groups and/or individuals.

Check out the program and venue info on their blog https://londontattoocircus.noblogs.org/program/

This is an informative, fun, anti prison event, which is open to all who are opposed to oppression in its many forms, and aware that we are stronger learning, listening and working together. Please be aware that the issues being addressed may be challenging and/or triggering. As well as loud music, and flashing or brite lights

After the New Year Eve demos at HMP Brixton and Pentonville and more recently at HMP Bronzefield, those who oppose this prison society will gather once more outside the walls of HMP Pentonville. Bring your love and support for those incarcerated ! Bring your rage and hatred for those who maintain the British prison state !

Global day of solidarity with Kevan Thakrar & Against Solitary Confinement

On Valentines Day, the 14th of February around 40-50 enraged individuals went to HMP Bronzefield for a noise demo. In solidarity with over 500 women and youth inside and all those incarcerated in an oppressive and discriminatory society. We have no love for the state and its corporate apparatus of punishment and control.
With no interruption from the pigs or screws, we unleashed our rage for hours at the walls of the prison through our banners, messages of support, fireworks and chants.
The anger and the energy shared that night made us all excited at the possibilities yet to come. Stay updated for upcoming letter writtings nights, screenings, benefits and actions.

London Anarchist Black Cross has called a noise demo outside of HMP/YOI Bronzefield in Ashford (Surrey) on the 14th of February from 8-10pm. Bronzefield is the largest women’s prison in Europe. It’s the most expensive adult and youth women’s prison in England. At an annual £66,294 a prisoner, it is at least £10,000 more expensive than any other. It was privately built, and is privately run by the outsourcing giant Sodexo. We will go there in solidarity with all of those incarcerated in an oppressive and discriminatory society. We have no love for the state and it’s corporate apparatus of punishment and control. Under a Neoliberal Capitalist regime that destroys all possibility of love and replaces it with capitalist modes of mass consumption we want to express our rage at the cages that seperate us.

As with those incarcerated in women’s prisons everywhere, those inside are proof of a patriacal society maintained by the State. Most of people incarcerated in womens prisons have been affected by patriarcal violence;as survivors of domestic or sexual violence and have reported
experiencing child abuse. These facts evidence that the state “violently criminalises vulnerable women, who are overwhelmingly black, brown and/or working class”. We remember Natasha Chine who was murdered by the neglect and systemic failures of HMP Bronzefield and their staff. Natasha was one of nine women to die at HMP Bronzefield since 2010. Since her death in 2016 there have been three further deaths of women found unresponsive in cells at Bronzefield.

Make noise to draw visiblity to the prison industrial complex that is
strengthening and decentralising under the government and its ideology,
not just on New Years, and not just within the city. We do not take prison as an unchallengable part of our existence. We do not allow the prison to perform the ideological work of relieving us of the responsibilities of seriously engaging with the problems of our society, especially those produced of sexism, racism, “and increasingly, global capitalism”.
The prison is present in our lives and, at the same time, absent from it.
With no womens prisons remaining within London, gendered incarceration is less visible while systematically displacing imprisoned women far away from their
friends, families, and support services.

Against prison, and the world that maintains them.

London Tattoo Circus is happening on the 6th of April 2019. There’s bunch of stuff on. Workshops and discussion, tattooing and piercing, bands an music, performance and kids circus, food and drink. games, art etc…get involved.

Tattoo Circus is a DIY Benefit event in solidarity with all who find themselves imprisoned for their ideas and actions within the prison society.

This is a moment for those inside and outside the walls, fences and borders to share, learn, create and let our rage against all state repression be represented.

We are only as strong on the outside as the support we give inside..

Get in contact by either chatting to us or via email:londonttc@protonmail.com Put in the subject title what your interest is. Posted in General | Comments Off on Tattoo Circus London 2019 Posted in General | Comments Off on Come Write Cards For Incarcerated Comrades!

19th January is a significant day for anti-fascist and anarchists as each year demonstrations are held to remember Russian comrades, the journalist Anastasia Baburova and lawyer Stanislav Markelov, who were murdered by fascists in broad daylight 10 years ago, as well as other fallen comrades who were victims to fascist violence. Markelov, an experienced lawyer and social democrat, spent years fighting for justice in workers’ struggles, environmental protests and against the violence of the Russian state. Baburova, a young journalist with independent Russian newspaper Novaya Gazeta, was a reporter and anarchist from Sevastopol, Crimea. They were murdered in Moscow by a nationalist terror group with links to the Kremlin.

We also want to express our solidarity to the defendants in the “Network Case”, in which 11 Russian anti-fascists and anarchists have been detained and tortured as part of a security service investigation into alleged terrorism. These men, from St Petersburg and Penza, are due to go trial in the coming year.

The Russian state’s repression against political dissents acts in tandem with fascist gangs, a collaboration that has long been known and experienced.

With the turn to right and far-right fascist populist governments across the world from India to Brazil, USA to Italy, there is no more greater need that to share experiences and knowledge around this international moment which we are all facing whether in the UK or in Russia.

Whilst our comrades are faced with unimaginable violence by both the state and street-level fascist gangs, we intend to send a message of solidarity and defiance with this event.

What you can do:

We invite you to attend a meeting on Monday November 26th 6.30pm -9.00pm at Mayday Rooms, 88 Fleet St, London EC4Y 1DH. Please RSVP: london19jan(at)riseup.net
Discuss within your group to support this initiative
Save the date and republish this callout on your website

Posted in General | Comments Off on London: callout for solidarity with Russian Anti-Fascists

Solidarity With The US Prison Strike!

On August 21st, prisoners across the United States and beyond began a strike against prison slavery. This strike comes hot on the heels of years of previous prison strikes, call-in campaigns, and full fledged uprisings, as well as inspiring actions against ICE and massive anti-fascist mobilizations throughout August. Not only are all of these struggles connected, but our best chances of succeeding in any of them lies in building momentum across these different movements and beyond.

Come for updates about the ongoing strike. There will be prisoner letter writing, anti-prison distro, talks and food. From 6-9 on Thursday 6th of October at LARC, 62 Fieldgate St Whitechapel, E11ES 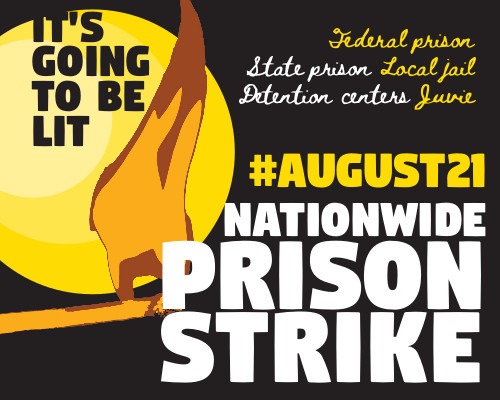 Posted in General | Comments Off on Solidarity With The US Prison Strike! To mark the 25th of July, London ABC invites all antifascists to the London Action Resource Centre (LARC) to show solidarity with our imprisoned comrades. The night will include prisoner letter writing, updates about various prisoners and more generally a focus on the repression faced by those who struggle against all forms of fascism.

For more information about the International Day of Solidarity with Antifascists Prisoners see below;

Since the last July 25th International Day of Solidarity with Antifascist Prisoners, the worldwide struggle against the nightmare of fascism and the far-right has grown and intensified. The news bulletins steadily report the racist and bigoted attacks, the harassment of journalists, the demonization of refugees and migrants, and the increasing presence and violence of organized fascist and far-right groups. While the bigoted, nationalist imagination reproduces itself on a global scale, it also attempts to turn us all into prisoners of the border.

Originating in 2014 as a Day of Solidarity with Jock Palfreeman—an Australian man serving a 20-year sentence in Bulgaria for defending two Romani men from an attack by fascist football hooligans—the International Day of Solidarity with Antifascist Prisoners aims to break down the borders and build an international response against fascism. By having an event, raising money, or dedicating an action to these comrades, we can simultaneously strengthen our local movements by ensuring that those who have acted to protect our communities against the fascist threat are never forgotten, as well as create the links of a powerful international solidarity which can transcend both the prison and the border wall.

This July 25th, we call on antifascists worldwide to act in solidarity with antifascist prisoners—the comrades who have been behind bars for many years, the friends who have just begun their sentences, the mates still awaiting trial—because they are in there for us, and so we must be out here for them!

No Pasaran!
Until All Are Free!