An indispensable volume of writings from my favourite anarchist writer, Gustav Landauer, has been published by PM Press.

Gabriel Kuhn’s fluid translations from the original German are eminently readable and the whole book is a reminder of what a powerful intellectual presence Landauer must have been in the anarchist movement at the end of the 19th and start of the 20th century.

You can order Revolution and Other Writings direct from PM Press. 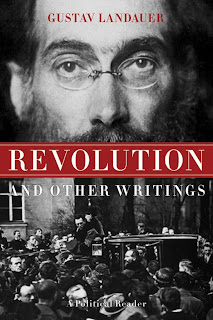