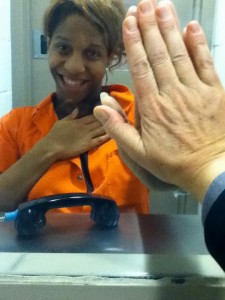 “Minneapolis, MN (May 2, 2012) – Earlier today, Ms. Chrishaun “CeCe” McDonald accepted a plea agreement to a reduced charge of manslaughter in the second degree in the criminal case resulting from the racist, transphobic assault she survived last June that left one of her attackers dead. The prosecution had originally charged her with felony murder in the second degree. However, after entering into plea negotiations this morning, the defense and the prosecution settled on the reduced charge. McDonald will be sentenced on June 4th at 1:30pm under Hennepin County Judge Daniel Moreno to 41 months in prison. The executed sentence will be reduced by one third, for “good time” and credit for the time McDonald has served pending this resolution.”

It looks like CeCe will be needing support for a while yet. We will try to keep her address updated so that people can continue to send letters and cards.

London Anarchist Black Cross, is a collective set up with the aim of supporting prisoners: political prisoners, people in detention centers or just people fucked over by the capitalist system.
View all posts by londonabc →
This entry was posted in campaign, prisoner support and tagged attack, CeCe McDonald, manslaughter, racist, trans-woman, transgender, transphobic. Bookmark the permalink.