Mandy Hiscocks Statement to the Court 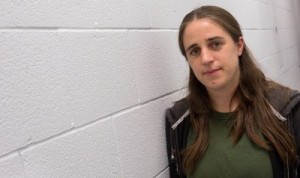 Mandy Hiscocks is one of the so-called “Main G20 Conspiracy Group” in Canada. She is currently serving her sentence for “counseling to commit mischief and counseling to obstruct police” in the Vanier Institute for Women and expects to spend most of 2012 inside, along with one of her co-accused, Leah Henderson. Although the two women are often less than 50 feet away from each other, they are forbidden from communicating. Details of how to write to Mandy and Leah are on our prisoner list and at the end of this post.

When she was sentenced on January 13th 2012, Mandy made a statement to the court that we at London ABC thought was rockin’, so, after a slight delay (!) we have re-posted it here.

Mandy Hiscocks Statement to the Court

It’s not every day you get the opportunity to speak directly to a judge, and I have a lot to say. This is my first opportunity to speak since this entire process started last June so I hope you’ll hear me out until the end. I plan to take about 10 – 15 minutes at most.

I don’t know you as a person or as a judge, so my comments are directed at the legal system in general.

I want to address some of the things you said on this matter in earlier sentencing hearings, particularly your references to the KKK.

When you sentenced Peter, Adam, Erik and Leah to jail, you stated that this is not political, it is about our tactics. You mentioned the KKK, and compared their actions to those of the non-violent civil disobedience protesters of the 60s. I agree with you that the tactics used by the KKK are reprehensible. I disagree with you that that kind of violence against people is anything remotely like the property damage that occurred on the streets of Toronto during the G20 summit.

Regardless, by focusing on the KKK’s tactics and not their politics you’ve missed the point entirely. The problem with the KKK isn’t only their tactics. It’s the fact that they’re a white supremacist group.

White supremacy is defined as “an historically based, institutionally perpetuated system of exploitation and oppression of continents, nations and peoples of color by white peoples and nations; for the purpose of establishing, maintaining and defending a system of wealth, power and privilege.”

I don’t think you disagree with me that there is a system of wealth, power and privilege in this country. I benefit from this system every day, and so do you. We benefit on the backs of others, most of whom are people of colour.

Systemic oppression is widespread in the legal system. Racial profiling affects who gets arrested in the first place, who gets charged and who gets sent home, whose charges the Crown decides to proceed with and whose they drop, who gets bail and who doesn’t. It’s not a secret that if you’re in custody during your trial, your chances of conviction are higher. And even if you do get out on bail, who gets compliance checks and who doesn’t means some people end up back in jail on a breach while others don’t. Who in this is more likely to plead guilty right away because they don’t have the time, tools or money to defend themselves?

The fact is that lawyers are expensive and your chance of conviction depends on how much time your lawyer is willing to put into your case. Most judges are white, and the jury selection process means that if you’re poor you’ll almost certainly not end up with a jury of your peers. And finally, sentencing relies on privilege (your education level, your chance of employment, your income, prior run-ins with the law, and so on.)

I don’t have proper statistics for all of the above, and anyway I know you know this stuff. I just want you to be aware that I know it too, and so do most of the people in this room today and in the video room.

However, here are some statistics that I do have: According to the federal correctional investigator, over the past decade there has been a 52 per cent leap in the proportion of black offenders in federal incarceration. Black people make up roughly 2.5 per cent of Canada’s population but 9.12 per cent of federal prisoners. In Ontario, 20 per cent of the federal prison population is black. Keeping in mind that people of colour have been hardest hit by the economic downturn and the conservative policies of our current government, and keeping in mind all the ways in which the legal system disadvantages people of colour, is it really any wonder?

My point is that a few broken windows and burned police cars at a protest will not lead us down the path of the KKK. The KKK targeted black people with overt violence and terror, and this system targets them with institutionalized racism, which is just a more subtle form of violence. In fact this legal system is doing the work of the KKK more than any anti-G20 protester ever could. It’s very telling that the KKK was comprised in large part of wealthy businessmen and lawmakers – the kinds of people our society and our legal system hold up as the best of the best. Perhaps this is why in 1987 Weatherman Linda Evans was sentenced to 40 years for using false ID to get a firearm and harbouring a fugitive, despite the average sentence for that being 2 years. In the same year*, a KKK leader named Don Black, who was planning an invasion of Dominica with a boatload of explosives and automatic weapons, was sentenced to 8 years, 5 of which were suspended, so that he ended up serving 3.

White supremacy is wrong, it’s violent and dangerous, whether it’s at the hands of a fringe group like the KKK or an accepted institution like the criminal justice system.

It’s not always what the “justice” system does that causes the problems, sometimes it’s what it doesn’t do. The courts simply do not consider systemic oppression and inequality.

In a book called The Red Lily, Anatole France stated that “The law, in its majestic equality, forbids the rich as well as the poor to sleep under bridges, to beg in the streets, and to steal bread.” The book was written in 1894 in France, but that statement still applies here, today.

A crime is a crime, you say, regardless of who committed it, and what leads people to crime doesn’t matter.

In 1999 the Supreme Court of Canada tried to address systemic injustice in their ruling on Regina vs Gladue. They stated that we need to acknowledge the circumstances of Indigenous people, the reasons they may wind up in the justice system, and the racist treatment and attitudes they encounter there. They recommended alternatives to prison sentences that mesh more with Indigenous cultures.

According to people who work in the field, many Indigenous accused still don’t know about Gladue reports or how to get them, and they aren’t always informed by their lawyers. Judges continue to resist the sentencing principles outlined at the conclusion of the Gladue case.

According to Statistics Canada, in 2008/2009, 10 years after the ruling, Aboriginal women represented 28% of all women remanded and 37% of women admitted to sentenced custody. Today Aboriginal women, though less than two per cent of the Canadian population, make up 34 per cent of female federal inmates.

The crown wants this sentence to be a deterrent. It won’t be. Please take a second to have a good look around the room. When i get taken out of here do you think you’ll have increased anyone’s faith in the system?

I am certainly not deterred, I’m just angry.

No matter what my sentence is today, it won’t be about justice. Your system is not about justice. If it was, don’t you think we would have come to you when the G20 decided to set foot here to pursue their obviously unjust austerity agenda? Don’t you think we would have asked for your help when the police started to put up their fences and cages, and randomly arrest whoever they felt like so they could systematically abuse them in the detention centre?

A court of real justice would defend people against aggressors. In this society, the privileged are the aggressors, but time after time you choose to protect their privilege and their property against people who are struggling to survive. You’re doing it wrong. Let’s not debate. The obvious answer to the violence and the chaos is the cops brought that. I’m going to try and finish.

This legal system that we have here is not equal, it’s not fair and its not just. And a lot of people out there believe that it is. What I would like to impart to you is that I don’t buy it and the statistics don’t support it.

This is why we, myself and the people in the other room, don’t have decorum in this system.

Throughout this farcical legal process that’s coming to an end today the accused have been told that our actions were an attack on the rule of law, which is at the heart of our society. Well good. Our society is racist and colonial, its rooted in wealth and power, and so is the rule of law that upholds it.

“I am carrying all my hatred and contempt for power, its laws, its authority, its society, and I have no room for guilt or fear of punishment.”

Please show your support by writing to Mandy Hiscocks and Leah Henderson at:

Mandy’s blog, bored but not broken, can be found here and is really worth reading!

London Anarchist Black Cross, is a collective set up with the aim of supporting prisoners: political prisoners, people in detention centers or just people fucked over by the capitalist system.
View all posts by londonabc →
This entry was posted in Call-outs, campaign, news, prisoner support and tagged anti-fascist, letter writing, mandy hiscocks, prisoner support, solidarity. Bookmark the permalink.