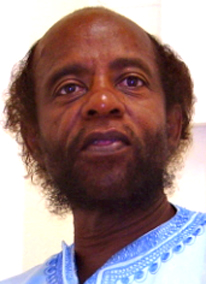 Sending a card is a way to let prisoners know that they haven’t been forgotten about. A card can be sent to the states for £1.28 and takes about 5 days. Remember to leave enough time for the post to get through the prison. If you can’t afford to send a card, then we’ll be happy to forward one for you.

Ed Poindexter and Mondo we Langa (formerly David Rice), have been incarcerated on life sentences for the 1971 bombing death of an Omaha policeman. Both have insisted they never manufactured a bomb, and never instructed a 16-year-old to make a 911 call to lure police to a trap which would kill one policeman and badly injure
another. So much evidence has come to light since their convictions to corroborate their story that Amnesty International and the Lincoln NAAC have called for their release, or for a new trial.
Mondo We Langa was a known member of the NCCF. (National Committe to Combat Fascism) This group consisted of Black Panther members that were working to protect the black community from police brutality. David Rice was Minister of Information in the NCCF. Rice’s political actions were a large part of why he was convicted.

More information on their case.

ABC Federation’s PDF “Who Are the Nebraska Two?” here

London Anarchist Black Cross, is a collective set up with the aim of supporting prisoners: political prisoners, people in detention centers or just people fucked over by the capitalist system.
View all posts by londonabc →
This entry was posted in Call-outs, campaign, prisoner support and tagged birthday, black panther, david rice, mondo we langa, national committee to combat fascism, nccf. Bookmark the permalink.