The first known arrests over new squatting law happened about an hour ago by squatters occupying a comercial property, who were using the upstairs residential area as an un-lived in social centre. 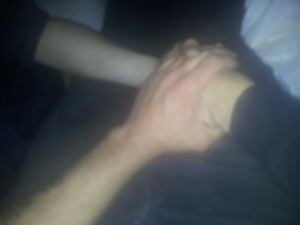 The police turned up this morning at around 11am to raid the property on London Road in Brighton, despite no crime being committed – as the new law restricts people living in unoccupied buildings, but not visiting them. Regardless, Sussex police have now arrested three people who attached themselves with glue (see picture), spending three hours to enter through barricades to remove them.

One of the visitors now on the roof of the squat said “On the roof init! Clowns got in but its gonna take them ages!” at 2pm, hours before three people were arrested inside the residential part of the building, despite not squatting the residential property.

The two roof top occupiers say they are up there to stay, as cops miserably fail to negotiate a deal with them. Support is currently gathering, but if you are free to pop down and say hello it’d be appreciated!

UPDATE – It’s all over and the rooftop peeps got away! The three arrestees have not yet been released and total solidarity to them.