Here the incomplete history of squatting in Brighton continues. You can find part one here

Part two of the Brief History of political squatting in Brighton … 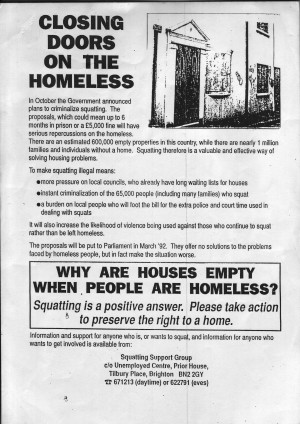 Throughout the 1990s, there were many squatted projects, whilst Brighton gentrified. The Laines began to change from scruffy independent shops to chains in a process which continues today. What is now the Komedia used to be a flea market. What is now the White Rabbit used to be a crusty pub called the Kensington. What is now the Office used to be another decent place to drink. There used to be a cafe on Queens Street called Disco Biscuit!! As the yuppies moved in and house prices rocketed up, the centre became standardised and residential squatting was forced a bit out of the centre (although squats in the centre still happen, but not for very long usually).

It seems that the political squatters were organising through the Squatter Support Group, based at Tilbury Place (which itself was squatted to begin with). 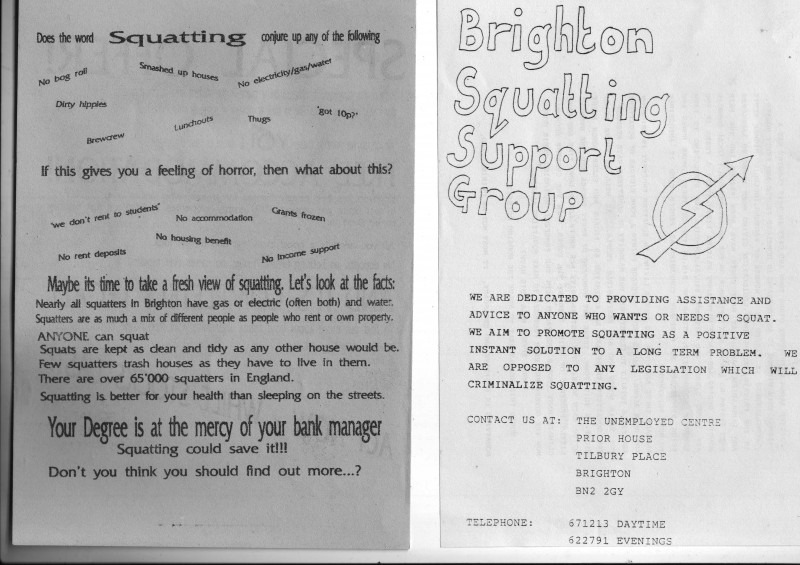 That bastion of truth the Argus recorded in 2007 that “The former Astoria Bingo Hall in Gloucester Place, the old court house and register office in Princes Street and the Madeira Café in Kemp Town were all wrecked as squatters descended on the city in the late Nineties”.

From 1993-5 some abandoned beach chalets were squatted near the West Pier. You can get a picture of just how much Brighton has changed when you go down the seafront and stop to observe that now these chalets are all now occupied by nightclubs, artists shops and tourist emporia.

Amusingly, when the squatters were evicted in 1996, half of them moved on to the abandoned West Pier, a wreck which could only be reached over water. You can find two local news clips on youtube (below) called ‘West Pier Squatters’ (with Bassam popping up but scrupulously ignoring his squatter past).

In 1994, the group Justice? was formed out of opposition to the Criminal Justice Bill (this later became the Criminal Justice and Public Order Act of 1996, which illegali egalised raves and tightened up laws on trespass, affecting travellers and hunt sa It also introduced legislation regarding the DRO – Displaced Residential Occupier and PIO Protected Intending Occupier, which didn’t stop most squatting since peopletend to occupy empty places, not somewhere where someone lives or is about to move in). The old courthouse at the Old Steine was squatted and hosted a lot of events(there’s an Undercurrents film about that). And Schnews was born.

Following that there wasthe Ideal In 1996, Justice? set up a Squatters Estate Agency to publicise the large amount of empty properties remaining in Brighton. You can also find a local news report about that on youtube…

Alongside Justice?, other groups active in Brighton in the 1990s were SPOR and Anarchist Teapot. Both deserve a quick mention.

From 1996-9 the Anarchist Teapot collective squatted a variety of shops and organised vegan cafes in Brighton and Worthing in something like eight locations. There was always free tea apparently. 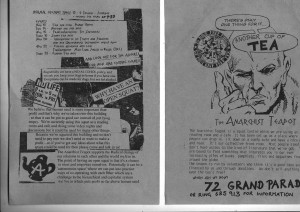 At one stage a Burger King was squatted on the London Road. The collective then shifted towards being a mobile soup kitchen, catering at activist events.

From 2000, a building on London Road was purchased which after two years of renovations would become the Cowley Club, a self-organised social centre which is part of the UK social centre network. Around this time there was a huge debate over whether legal spaces where a good alternative to squatted projects. In this particular case, it seems the move to a space which plays the legal game yet remains oppositional was extremely wise since public squats tend to last a few months at most in Brighton and the Cowley has been open now for ten years.

SPOR were a loose grouping of artists and musicians who put on a couple of high profile art events. In 1999, they opened up some buildings at York Place, near to St Peters church, for a month long art exhibition which culminated in a party. In Jan/Feb 2001, SPOR took the disused Co-operative Bank, on Ship Street. The place was worked on intensively and then opened up as a family-friendly art space. A film called Rhizomatic#1 documents some of the philosophy behind the project. When the time came to evict, confused bailiffs met sock puppets talking to them through the letterbox and then broke in to find an empty building. The squatters had barricaded the building and then escaped from the roof. SPOR published some zines (plus a spoof Schnews) and were involved with the May Bug ball, a temporary occupation of the land below the station which is now yuppie flats. There was later an occupation protesting against Sainsburys, which was written about in a long piece in Schnews.

As we move into the 2000s, we can see that squatting continues, following the same pattern of ebbs and flows. Sometimes up, sometimes down. Not so organised, no squatters unions, but still happening.

Medina House is a lovely old building on the seafront in Hove, next to the King Alfred’s Leisure Centre. It was first squatted in 2002 and stayed squatted for years, despite occasional complaints about noise. 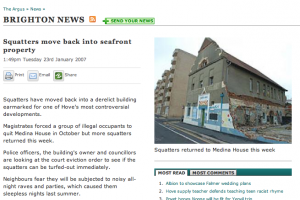 The house was finally evicted in 2006. Only then to be resquatted and quickly evicted again! Now, Medina House stands empty and lonely, closed by a Fire Order after the Fire Brigade blocked up all the entrances, meaning it is a hazardous building which no-one is allowed to enter. The owner continues to press for planning permission for an obscene eight-storey block of flats.

To take some other events which happened through the 2000s, in 2003, there’s a report of the Terra Audio social centre at the ex-Territorial Army barracks, on Lewes Road. According to Schnews, events were planned as follows: Punk Bands on Friday night (13th) at 10.30pm;
Sunday (15th) – Evian report back and footage, riot flicks and practical positive stuff, doors open 6pm. Unfortunately the Space Invaders Festival was busted. The barracks are STILL standing empty today (2012).

In 2006, Home Farmhouse in Stanmer Park was squatted. It was squatted again for a blissful few weeks in the summer of 2010.

Also in 2006, the Ray Tindle Centre on Upper Gardner Street was squatted as a social centre. The full tale of despicable speculation is told at Rough Music. There’s also a film on youtube…

Clued-up Rough Music readers will surely be aware that squatting is sensible and legal. Unfortunately, reliably thick and corrupt Sussex Police don’t seem to be so clear about it, and treat squatting as one of those things that aren’t quite actually illegal but should be – like protesting, cycling and tofu.

In April 2008, to tie in with the days of action in support of squats and autonomous spaces across Europe, a church was squatted on London Road. It lasted a few months and resisted eviction before being forcibly taken. It features in a film called Takeover and was briefly resquatted as a SmashEDO convergence space in 2009. The front of the church has now been converted into living space and the rest (ie the hall and a large back room) are presumably still standing empty. 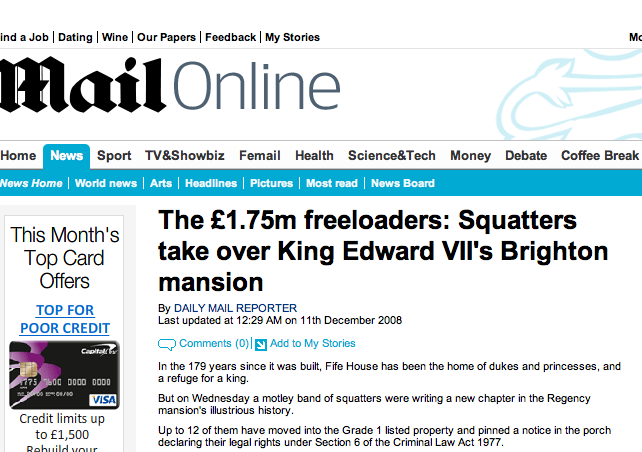 The same year saw people squatting Fife House, an opulent property on Lewes Crescent, adjacent to Sussex Square. This got quite a lot of press and formed part of a whole string of stories (mainly London based) of so-called ‘millionaire squats’. Interestingly, the media (until recently at least) have been quite sympathetic to these occupations, presumably since it involves the ultrarich being punished for leaving expensive properties empty (as second or even third or even tenth houses!).

And Temporary Autonomous Art took place in Brighton for the first time, in a squatted warehouse in Portslade, in 2008. TAAs (inspired by Hakim Bey’s notion of the Temporary Autonomous Zone) have been taking place all over the country recently – in Manchester, London (where they began), Sheffield and Bristol. What began as a tactic to release creativity from the underground free party movement in London has evolved slowly into an art exhibition taking place in a squatted warehouse environment.

The 2009 version could have gone better, with a warehouse venue in Moulsecoomb bring squatted since it was felt that a more central venue was too risky. This meant that the event catered to friends and friends of friends rather than the public. The 2010 version ended before it began, with the venue getting illegally evicted on the Thursday.

The Freespace collective occupied the former Gamer Heaven, a shop under a block of offices near to Preston Circus in 2009. They organised some cafes and gigs, an idea which was then carried on by the InItOnIt crew, for example in the ex-school on Old Shoreham Road, which had widespread local support since residents are united in their outrage at developers leaving buildings to rot and fall down so they can then build new yuppy houses.

Oh no, it ain’t over yet. The third part of the history brings us up to the as yet unwritten present…