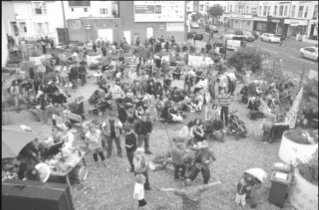 This new decade has begun with some positive stories for example the Taj occupation and the Lewes Road Community Garden (pictured above, now sadly evicted, Schmovies made a great film about it). The garden was a great example of local people taking direct action to convert a rubbish-strewn lot into a vibrant space, which then unfortunately was evicted and built upon. The final ignominy was that Tesco were supposed to move in to one of the two shops, but a couple of years on the two shop spaces are still standing empty…

The Mound was another attempt at a guerrilla garden which unfortunately didn’t last that long. 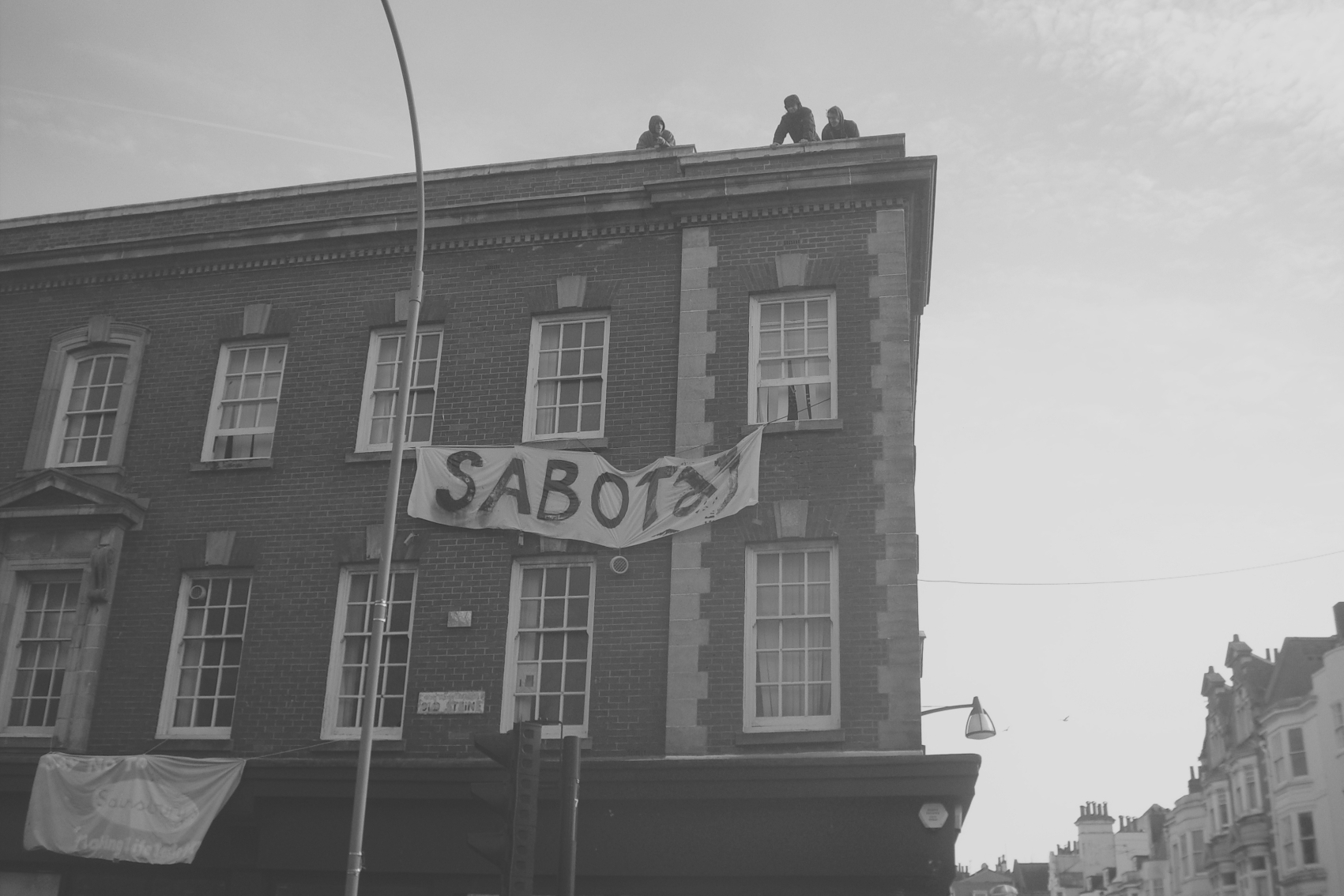 Taj was a Brighton institution, a fruit and veg shop with two branches, one on Old Steine, one on Western Road (with a ‘secret’ third one just round the corner from Western Road). Unfortunately, the parent company defaulted on a loan and as a result went into administration, with the result that the Old Steine branch was closed. This was a talking point in the local community which only become more outraged when it emerged that Sainsburys were planning to move in.

A grassroots campaign was set up opposing the Sainsburys plan in December and in February the former Taj building was squatted. This gave a huge boost to the campaign and people flooded in, with over 100 people at the initial planning meeting. Unfortunately the building was quickly evicted, but lots of new connections were made. Regrettably, the Sainsburys Local is now open but the campaign to keep supermarkets out of Brighton continues… A longer story of Sabotaj is over at brighton.squat.net, where you can also find a big list of links to websites for existing and former squatted projects. 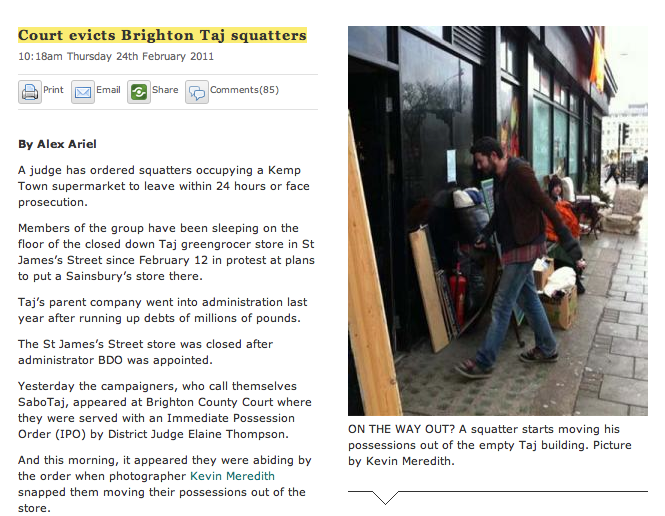 Following those two major projects, there have been lots of other things going on. There was a squatted school in Lewes which originated as a south coast climate camp project and a social centre on Churchill Square which was in support of striking workers.

A report on indymedia records:

It sure was nice to parade through churchill square, the most ugly part of town, surrounded by a group of shouting toddlers and activist parents, to be met with an occupied anti-commercial space with banners screaming ‘Strike Resist Occupy’. Sometimes even nowadays Brighton isn’t so bad. I find marches difficult as I always end up feeling impotent and sad as all the good energy dissipates, but this time, I left the march and sat down with all the other old protestheads in the centre and had a cuppa and a chat. It was a great end to the day (which in fact had only just begun).

Situated in the heart of the commercial district, the centre was open as a freeshop and lasted a lot longer than anyone expected. It’s still empty and it was resquatted for a cheeky party which went off without any hitches.

Since then it’s been a rollercoaster ride, with five or six sorted squats normally open, but only really lasting months, if that. North Road, just up from Infinity saw a dry social centre, where people were asked to refrain from drinking. At a certain point, the Squatters Network of Brighton (and Hove Actually) was born. The fight against criminalisation saw several marches and some other actions. 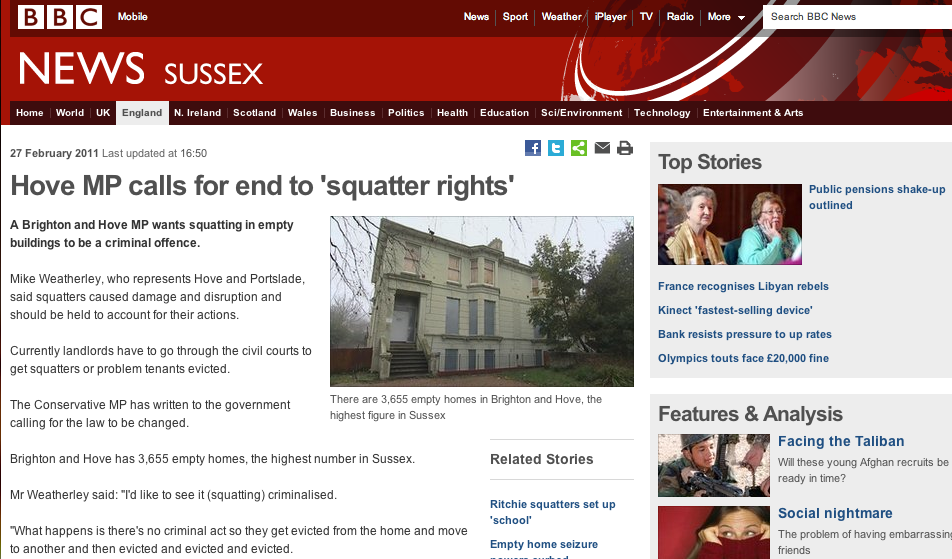 Hove MP Mad Mike (and always misspelt) Weatherly’s bullshit pronouncements have been repeatedly rebutted by SNoB and friends (comprehensively caught out by Schnews on trying to claim support from unnamed homelessness charities and latest here). There was also a glitter action against Weatherly crony Robert Nemeth which is now the subject of an ongoing courtcase (amusingly he both seems to think he was assaulted and appears to think this will stand up in court!!!!)

SchMovies have made three nice little films about some recent projects such as the Autonomous Homeless Shelter and the Squatters Convergence at the old Co-Operative supermarket on London Road. The convergence was great – people from all over Europe gathered for workshops and to play zombie tag. Over the Christmas period 2011-2012, squatters made headline news when they refused to be evicted from an ex-council temporary housing unit which had lain empty for three years on Wellington Road.

In Kemptown, Darkside was illegally evicted and the slow court process carries on. Next door, people set up a wicked project in an old shop, buying fresh local veg and fruit and giving it away for donation. The project was really successful, showing people don’t necessarily want to buy their food in supermarkets if another option exists, but unfortunately got shut down quite fast (and illegally). The shopfront later got decorated.

The Freebutt, once a music venue, was squatted for quite a long time and the flat next to the Hippodrome was also cracked for an art event by CRAB, who also did an art gallery at the squatters convergence and occupied lecture theatres on campus. 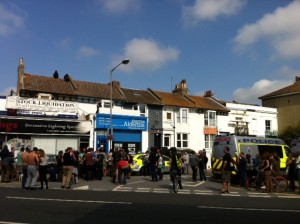 Recently (September 2012), the law changed to make squatting in residential buildings a criminal offence (rather than a civil matter). This ill-thought out and probably unenforceable law was expected to make an impact in Brighton and it did just two days after it was introduced, with three people getting arrested on London Road. You can read a fuller report and see more fotos here. The youtube video below shows Sussex’s finest plod failing to break the barricades for more than ten minutes (the commentary is hilarious).

It does not seem likely that squatting will stop, in any case. 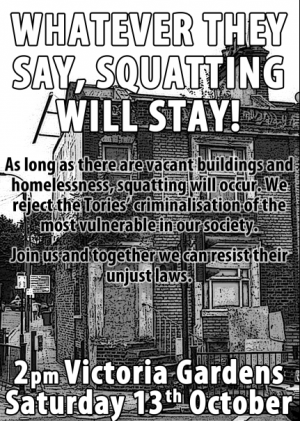 Smash the hotels, squat the moon!