Leaf Street is a publicly accessible community garden situated on Bentley House estate in Hulme. The site is an old road that was turfed by the Council in 1990. It remained as a little used strip of grass until 1999 when residents began talking about creatively managing the space, as a resource for the community. They took some persuading, but eventually, the Council gave us permission to do something with the space and in September 1999 the site was used for a practical design exercise. Participants held a community consultation on site and created a design.

Clearing some space for Veg planting on a workday

Following this, there was a much enthusiasm and local people helped to make the garden a reality, using what can best be described as “guerrilla” gardening tactics. The garden sports top fruit, soft fruit, herbs, wildflowers and ornamental shrubs.

Unfortunately, local people with the time and resources to co-ordinate activities are few and far between. Ups and downs in energy levels, participation and how tended the garden appears reflects this. In December 2002, a company, Leaf Street Ltd, was set up and funds were raised to employ part-time workers to garden and support volunteers. Sadly, the company was dissolved in 2008 when those involved left the estate. In retrospect, many thought that a limited company was a poor choice of structure due to the amount of paperwork required. In recent years gardening sessions have been organised by the Tenants and Residents association and an informal group of gardeners.

Over the years, excessive shade, impoverished soil, pollution, public access and fouling by pets, have shifted the focus more towards the garden being a recreation and wildlife habitat. Yet despite these obstacles there is still much good food and herbs grown on site. In the autumn, children from the estate play in the garden and eat apples and pears, fresh from the trees.

Adapted from text by Rob Squires 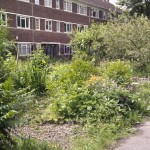 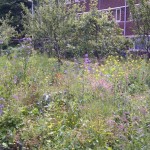 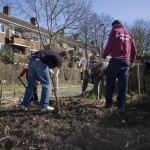 Clearing some space for Veg planting on a workday