We attend many of the veggie and vegans fairs in the area, including those in Evesham, Worcester, Malvern, Gloucester and Cheltenham, where we have stalls with leaflets and merchandise, often teaming up with Gloucestershire Badger Office and other wildlife groups from the area to raise awareness of various issues. 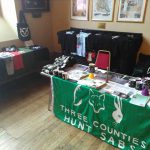 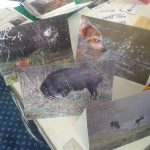 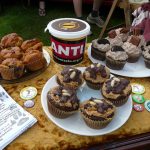 Our sab group are very interested in doing stalls at fayres, talks in universities and schools and presentations to organisations. We have spoken in Lush stores, fayres and festivals in Birmingham, London and other areas, helped set up displays in libraries and organised talks and presentations in colleges. Please contact us for more information or if you know of any fayres or other events which we might be interested in contacting the organisers of. We have attended the Vale Wildlife Hospital open day a few times too, helping raise awareness about our own work whilst raising money for the hospital as well and hopefully drawing more people to the event! We also turn up to various other events including country shows and local hunt open days to hand out leaflets, talk to the media, hold banners and talking to those turning up to the events. We don’t have an issue with country fairs in themselves and also attend them ourselves. Maybe one day we’ll have a stall… in the meantime, we’ll just hang out at NFU and hunt tents… 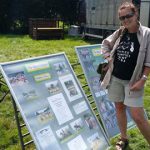 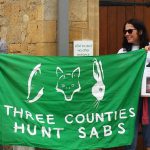 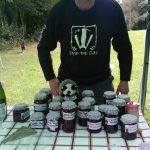 Teaming up with local anti-badger-cull people and Gloucestershire Badger Office we help host public meetings and events such as fundraising bike rides – some locals held a small event in Newent during a fundraising bike ride to raise awareness as to what is going on locally. We may also turn up to fundraising events held by those we campaign against such as hunt balls (though obviously don’t end up buying tickets for those!) 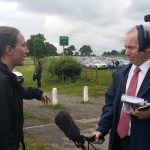 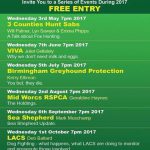 We have written a number of articles on various hunting issues to raise awareness about things like hunt terrierwork and cubhunting. You can find these in other sections of this site. Please let us know if there’s something else you’d like to see! In addition, we’re happy to chat to the media at times and this is also a form of raising awareness of issues (when the media actually want to run a story…).

For example, we were featured in this Guardian article in 2018 to do with the ongoing badger culls. We have had sabs interviewed by Deep Green Resistance and Scum Remover:

When we’re asked to provide comments regarding hunts or the badger cull, we tend to respond as it makes sense to try to get some of our views or evidence into news stories…

In this article in Gloucestershire Live, one of our sabs is mentioned with reference to finding illegally blocked badger setts and fox hunts traveling across where there are bTB breakdowns. We also got mentioned in the Stroud News and Journal as Gloucestershire Badger Office on the link between hunts and badgers. There have been a number of other articles regarding the badger cull over the years and, in August 2018, the BBC were one of several outlets which picked up on a story led by our friends in Cirencester Illegal Hunt Watch which spoke of the seasons of work that we put in alongside them on exposing illegal tampering with setts done by the hunts in our area.