“Extreme Democracy Outside” was what one of the team called our outing to Bristol on Saturday. The wind and the rain put the kit, the enthusiasm of Bristolians, and the dedication of the instigators to the test – and all passed!

A Dutch study found that bad weather does indeed translate into low voter turnout in elections; on Saturday in Bristol the weather meant that not many passers-by passed through the Harbourside Area, and those who did were mostly pretty reluctant to stop, with grey clouds alternately threatening to dump rain, and actually dumping rain. 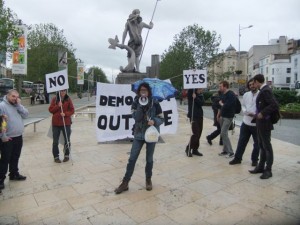 Doing democracy in the rain

But a few did. Two children enthusiastically gave their views on the royal family: “They just sit around in baths of money”. A local man with otherwise quite radical views on voting and royalty surprised us with his opposition to giving people in prison the right to vote: “They’ve taken away the rights of others so they shouldn’t have those rights.” Some appropriately enthusiastic Climate Rushers turned up, braving the weather for their own campaigning, and joined in with articulate gusto, and even asked their own question: “Do you think that the next generation will call us criminals for failing to take action on climate change?” 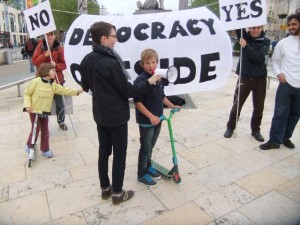 When the rain got too much the DemO trio headed over to the Bristol Nature Festival to find a marquee with tea in it. Eventually the sun broke through, and our enthusiasm briefly revived – and in the spirit of opportunistic street theatre, we set up again, attracting a lovely variety of younger and older participants; a couple were in pushchairs, though it’s fair to say they didn’t participate terribly actively. Discussion got very involved and as we packed up for the afternoon, participants wandered off continuing their conversation and making new connections.

A big thankyou to Zoe and Benoit, and to Aaron and all who took part.