Going North, community, and the future

So here we are at the end of a summer of playing politics and street-level democratic dialogue. After the sunny success of Brighton, Democracy Outside headed to Yorkshire for dates with learning disabled activists in Leeds, friends and permaculturists (some overlap there!) in Hebden Bridge, and then to Manchester to take part in the Hazard festival of street theatre.

Thursday 12 July in Leeds’ busy main shopping street, Briggate, was a blast – the disability activists from Change who helped stage the performance were engaged, enthusiastic, and had a lot to say about their rights to think and speak for themselves. It was a really empowering experience, not just for the volunteers – on seeing disabled people playing Democracy Outside, other disabled people passing by joined in, something which hasn’t happened with any of the other performances. They really proved that almost cliched point about diversity for me: that if you feel excluded, you’re more likely to join a movement when you see others like you already part of it. After the performance, we went back to Change to hold a workshop about how to make democratic processes more accessible. Big thanks to the inspiring activists from Change, not least for taking a lot of brilliant photos. 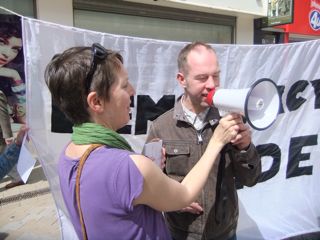 Speaking out in Leeds

Two days later Democracy Outside rocked up in Hebden Bridge, less than a week after the second, devastating flood had washed through the town. But the sun had been shining for a few days, and people were glad to be out and about. Hebden was the smallest town where we did Democracy Outside, and energy was low. Quite a lot of people watched from nearby cafes, and a few people challenged us, asking why we were bothering, or what was the point. Then some young people and children brought the buzz back when they stopped by to play – and told us we had to change the questions and explain them better for young people: “Use our language,” they said! We tried, but it showed up the generation gap, and made me think that maybe we need to show young people how to do Democracy Outside for themselves! 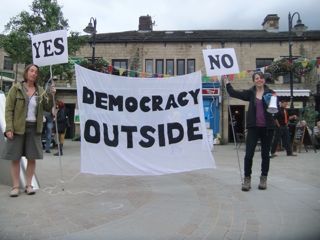 artists getting ready to play in Hebden Bridge

Finally on the last date of the tour we took Democracy Outside to Manchester with anti-cuts and (pro) NHS campaigners, mixing art and politics as part of the Hazard 2012 festival of street theatre. Debate was feisty, with a lot of people moving about between ‘YES’ and ‘NO’, hovering in between, changing their minds, doing what I like to think of as the ‘dance of democracy’, and with a lot to say about it all! Thanks to Tamsin Drury of Hazard, local anti-cuts hero and performance poet Steph Pike and Siobhan for bringing glamour and excitement to the end of Demo2012… 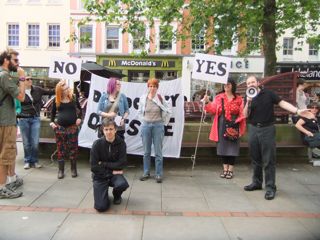 a Hazard-ous spectrum of views in Manchester

It’s been a great summer. Travelling around with Democracy Outside, I’ve found that, despite the despair of the mainstream, ordinary people outside the ‘Westminster bubble’ – the people who are assumed not to care about democracy – really do believe they have a right to speak and be heard, and will take a chance to share their views with each other. There’s an appetite for more – Bristol Climate Rush want to get some public dialogue going around climate change and what we can do about it. Brighton players want to take Democracy Outside to smaller towns nearby (watch out Worthing!)

So now it’s time to reflect a little more one what came out of Demo2012, and think about what comes next! Share your ideas here, or on the facebook page and help develop future democratic dialogue fun.

Democracy is about communication, and communication comes from the same root as community. So I’d like to thank my community who helped make Demo2012 happen: the goddesses and citizens of democracy; my loving friends who encouraged me and held me together; and special thankyous to Ellie, Stig, Zoe, Benoit, Vicky, Jon, Mo, Max, Sushila, Phil, Andy, Christina, Siobhan, Cornerstone (number 40), Tomas, Val, Graham; the Arts Council and the Lottery… and thank you to the rain for holding off often enough to make Democracy Outside possible in the wettest summer in memory!