The Ledbury Hunt met in Eldersfield today, Christmas Eve. We were with them on and off all day. This video shows sabs finding the hunt in Tirley, unfortunately during the aftermath of a kill. The video shows what it shows. Some of the photos may be upsetting to some people: Facebook Video

Two sabs from 3C headed out to Pigeon House Farm in Eldersfield where the Ledbury Hunt would be meeting. Support vehicles crammed into the small country roads to see the hunt off. They went straight into a field by the farm and began to draw a stretch of rough vegetation but a member of the hunt rode quickly to Mark’s side, talking to him and pointing the opposite way and Mark gathered the hounds and took them in that direction. They must have spotted the trail-layer running that way… Mark’s son Samuel attempted to block the road to us, but his pony was more than happy to follow the sabs’ suggestion to “walk on”.

The scent wasn’t fantastic for much of the day as there was a mix of heavy rain (hailstones at one point) and then warm sun but the hounds inevitably picked up on a fox in Berth Hill. Sabs had just jumped out of the vehicle near to hunt support on the East of the hill when a fox came running towards them. He jinked through the hedge and crossed into another field further down the road, his line covered quickly by citronella. Mark gathered the hounds and brought them down to the road to try and pick up the scent – it is seen as bad huntsmanship if a huntsman has to take his hounds to a scent instead of casting them and letting them find it themselves… They lost his scent for some time and sabs got to meet a very upset landowner who says the hunt trespass on her land everytime they are in the area. She was having to shoo hounds off her land at the time. Pro- or anti-hunt, it doesn’t matter; she was worried about her sheep and they’re the reason the hunt shouldn’t be there. Was there an apology from Mark? Or any of the huntmasters? We’ll see – ex-master Roger Warner was the only one who seemed reasonable when sabs explained the situation.

With foot-sab being injured-foot-sab for the day, less running than usual took place and this meant we couldn’t be right with the hunt for some points of the day. We did manage to check on a number of “at-risk” setts and drains, however, but just as we were talking about the legendary “3-o’clock fox” and left a drain to go and find the hunt again in Tirley, we found the aftermath of a kill. Hounds were circled around ‘something’ in a vegetable field just off the road and one of the masters was shaking his hand at someone in a “go, go, go” shooing-away frantic sort of way… Injured-foot-sab ran to the field, ducking under the heads of the master’s horse and another pony which had been moved into her way. As she filmed a young man (pictured) picking something up from the floor, next to huntsman Mark and the hounds, a supporter walked into the way of her camera.

It was a toss-up between running to the scene-of-crime or stopping to film with 20 or so support close behind her and walking into the field, but the film still shows what it shows – the young man passes the body (which the hounds are still very interested in) to Mark who rides off at speed – and the stills and bits of body found confirmed our suspicions that a fox had been killed. It’s a shame the footage wasn’t clearer, but these things happen. Terriermen, when confronted down the road, kicked mud at us and sped off down the road – what are you hiding boys?

The hunt packed up very soon after with Mark disappearing into Townstreet Farm as soon as he jumped off his horse (probably needed to get out of his blood-soaked jodhpurs…) and we checked on another “at-risk” drain, meeting the owner of the land – who presumably had given the terriermen from a few weeks ago permission to flush a fox from the drain using Nel the terrier… No, that was her husband; she was quick to dob him in.

Whilst we were in the field after the hunt had packed up, three masked men (including one of the terriermen and another boy who used to ride the quad) and another man arrived. We left the field, more internal organs in hand, the man confirmed he owned the land and he had let the Ledbury illegally hunt on it and we returned home. Longer video to follow someday soon. 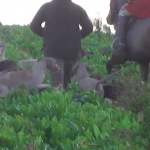 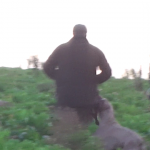 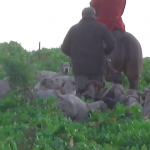 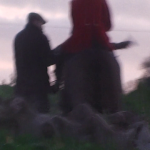 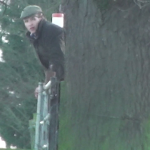