Today we were delighted to receive news of our old friends the Heythrop as they second horsed at Becky Blandford’s at Weaverley farm. An anti hunt activist had been keeping tabs on them and we commend the initiative and bravery of this individual and urge others to film hunts that they see out and about. And the Heythrop? They even pretended that they were not the Heythrop, tsk tsk, being embarrassed of your own hunt!

In other news we were out with the Ledbury on Monday from Pauntley Court; not much happened in the fog and we were with them most of the day. The CVFH cancelled on Tuesday and we said goodbye to Joan Court, a highly inspirational individual who fought for all animals all her life on Wednesday at her funeral in Cambridge. 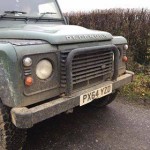