Since 2013 the government has conducted a cull of badgers in an area of Gloucestershire. Culling in a second area began in 2016 in the Cotswolds. Gloucestershire Badger Office was set up to resist culling in the area and to raise awareness of badger persecution. An online map commissioned by DEFRA and the Welsh Government shows bTB breakdowns. The blue dot on this map shows one such area at Hartpury College’s farm in the original cull zone. Tweenhills Farm and Stud, labelled on the picture, is a meet for the Ledbury Hunt. Within this area 5 different badger setts have been blocked repeatedly over the years to stop foxes from escaping below ground during hunts; 2 setts also show signs of having been dug out (to get to hunted foxes) this last season. Throughout hunting seasons we find hundreds of blocked setts within both cull zones in Gloucestershire, within the Herefordshire zone, in potential new zones being considered for 2017 onwards (South Glos for example) and other areas within Worcestershire and Oxfordshire. Similar reports come from across the country with hunt terriermen being observed and filmed blocking setts and being caught digging them out, meaning terriermen, their terriers and vehicles, hunt staff, hounds and horses are spending time in and around badger setts, going from sett to sett and farm to farm, spreading potentially infected biological material. Research funded by DEFRA and led by Professor Rosie Woodroffe concluded that contaminated pasture and dung is likely to be a major contributor to the spread of the disease and that the bacteria can survive in fields for months. Hounds at the Kimblewick Hunt contracted bTB in early 2017, suspected to be from eating infected carcasses. They could potentially have spread it to badgers, foxes and livestock before symptoms were spotted – surely a concern for farmers allowing hunts to block setts and hunt on their land or whose land they trespass on? Hounds have fallen into slurry pits on farms before running on – recent research concluded that contaminated slurry may be a major factor in the spread of bTB. Additionally, how can the cull be judged on how effective it is when other measures are in place at the same time? Tighter regulations on cattle movement cattle, more vigorous testing, badger and cattle vaccination, improved biosecurity… When we visited the NFU stand at the Three Counties Show in 2016 the South West Policy Manager agreed that with so many strategies in place the effect that the culls specifically on bTB would be difficult to determine and that it is, regardless, too early to see any effect of the recent trials on the disease. So far only anecdotal ‘evidence’ exists regarding the effect of the culls on reducing bTB and we know that levels fluctuate in areas – bTB dropped in Dorset the year prior to the cull beginning.

We have observed and evidenced a large number of biosecurity hazards over the last few years in Gloucestershire as well as breaches of cull license guidelines which could potentially increase the risk of the spread of bTB. This picture shows a hole dug into a sett by badger baiters caught by locals just a week before the cull began in 2016. This sett has been heavily targeted by contractors during the culls. Continued disturbance of setts and resident badgers increases the risk of perturbation, of badgers moving out of setts to live elsewhere, ranging further and mixing with other social groups. One of the reasons that the time limit of 6 weeks was placed on the cull periods was to lessen this risk yet disturbance goes on year-round, potentially moving badgers infected with bTB on to neighbouring land and much further afield. Could badger baiters, fox hunts and others have caused infected badgers to move on to your land and spread the disease? Don’t we all need to be more alert to such people disturbing badgers in order to stop this potential scenario? At the same time, farms with higher welfare standards and improved biosecurity measures which have setts on the land and are surrounded by herds that have tested positive and yet have never had animals contract bTB themselves. Look at the conditions humans lived in when TB was a greater risk to us… is there more we can do rather than culling badgers? Badgers continue to be scapegoated and blamed for the spread of the disease, but look closer at the evidence that they do so and it becomes clear that some results of research have been exaggerated. Scientists at Imperial College London stated that badgers account for 52% of the disease in cattle, but actually concluded that less than 6% was due to direct contact between badgers and cattle, the rest cattle-to-cattle transmission. They also stated that there was considerable uncertainty about the estimate of 52% but that it’s at least 38%… Whilst these scientists remain uncertain, researchers from Cambridge and Warwick universities are much more certain that culling badgers will have “little impact” on the disease, indicating that 84% of outbreaks are due to cattle movement, infected fields and the failure of tests. Studies show that vaccination of badgers reduces the risk of them becoming infectious and that some protection transfers to cubs. Human activity and refusal to accept the science is causing the wider spread of bTB in badger populations – humans endangering wildlife once again…

It’s great to see that others, including the media, are now picking up on the potential for hunts, etc to spread bTB… we’ve been saying it for long enough! 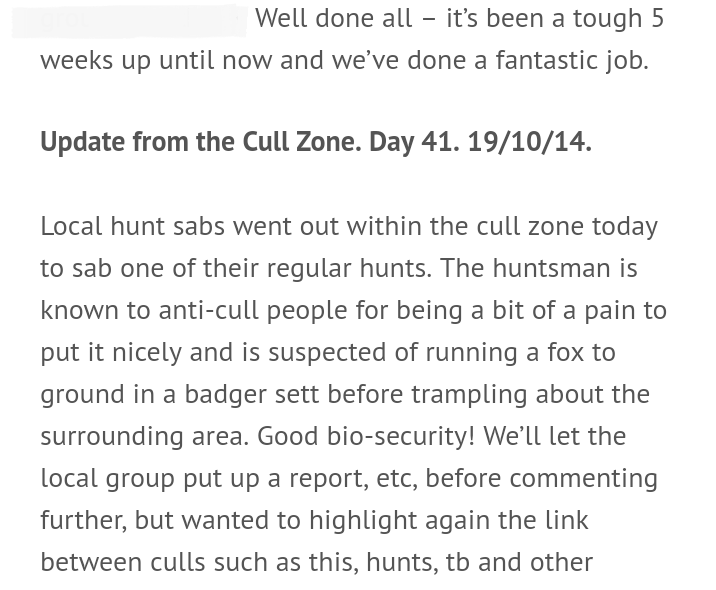