9th December 2016, Ledbury, Cromer farm, Pendock. We found them hunting a fox at Staunton Coppice. Fortunately foot sab was present with camera in front of Master Louise Daly and that fox was let be. On they moved to Gadfield and then Gadbury Bank where foot sab was evicted by terriermen. the tour of the Gloucestershire cull zone continued through Eldersfield Marsh, Pigeon House Farm and then over to Chaceley. We found hounds speaking at Werth Farm and sure enough at the bottom of the bridleway were the terriermen on a quad and the hounds, who may have been marking to ground. Foot sab was grabbed by them, on the orders of huntsman Mark Meladay, and forced back down the public bridleway a fox then ran between sabs and terriermen. Mark then holloaed blatantly and brought the pack forward.

They hunted intermittently with poor scent and were seen near Forthampton Court. Back at Werth Farm, some thirty minutes later, the same fox was seen and was by now “sinking”, utterly exhausted, so much so the sab was able to grab citronella from the car, lock up… and he was still there. As can be seen from the photo his mouth is wide open. The lane was sprayed and the hunt went the opposite way. Poor scenting conditions probably saved his life.

The hunt packed up at Town Street Farm (they were only just there on Saturday) by 15.30 which is very early for the Ledders. 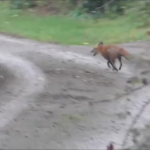