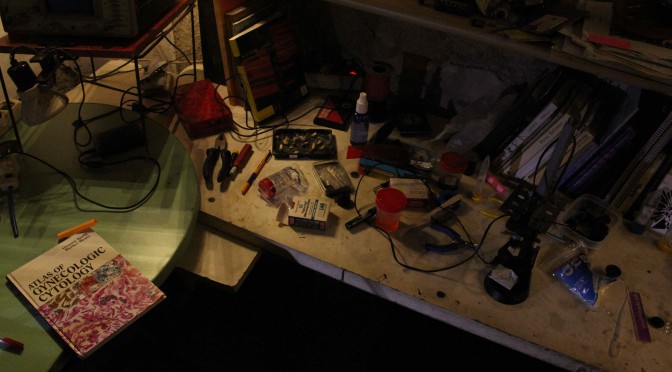 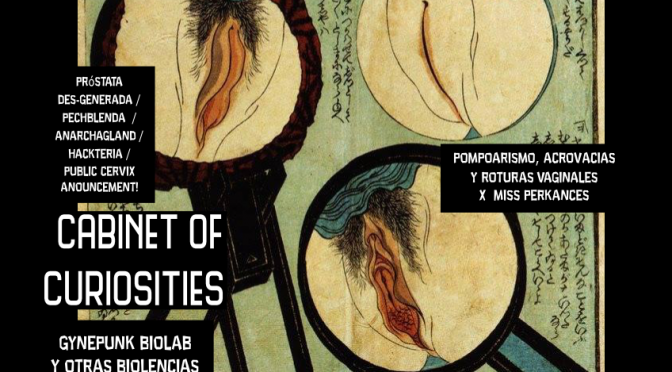 we are living on one of the previous century hydroelectric that I suppose has a lot of copper to generate electricity; we are using among of copper every day, every second…

At Pechblenda lab for example a lot of copper cable is always around, motors, pumps and other electronic components create the space, inside right now me and Beka, is time to work together.

we are conceptualising our ritualistic performance for the next Saturday, we are also working on automatization and internet of things, so we are so happy with the transfer of energy between us.

this idea to focus on a element like copper comes from our curiosity to research and investigate the matter around us, like a infinite process of experimenting and learning how the things are, how the things work.

rain of ideas for the Cuprum ritualistic performance ;:;::;

Copper is known as a good conductor of energy, as well as a balancing metal that works with the flow of projective and receptive energies. Copper is known to Shamans and Healers to be a metal that balances the body’s polarities, thereby removing blockages which are responsible for illness or imbalance. Copper is healing for the mind, body and spirit. It provides a harmonic connection between the physical and astral bodies and also can align the subtle bodies. It has been used to amplify and transmit thought and healing energy. Copper has been used with stones and crystals it helps to align the stone’s individual energy field (since every stone has it’s own properties). It has also been used to create a unique balance of energy, by combining stone and copper, which remains solely unique to the individual using it. It can assist in combating fatigue and lethargy, restlessness and non-acceptance of ones self.

It is said that the regimen of Alchemy is greater than is perceived by reason, except through divine inspiration. Alchemy is a deep study, so it will not be explained here in great depth, solely the concepts of Copper within Alchemy will be mentioned (go to The Alchemy Website for more information on Alchemy) Copper is one of the seven metals of alchemy, representing Venus. The Alchemical vessel is a symbol of the soul. Copper can be seen as having a soul as well as a body; and the Art of Alchemy can be defined as “the liquefaction of the body and the separation of the soul from the body, seeing that copper, like a man, has a soul and a body.” There is also relevance and importance in the Ankh and its representation of copper. The Ankh is a powerful symbol of immortality and it also contains all the sephiroth of the TreeOfLife from the Kabballah. The watery and venusian aspects of copper and its interaction with other metals is seen within Alchemy. As Mars and Venus in mythology were closely related, so are they found bonded together in the depths of the earth: the principle copper ore is in copper-iron pyrites, in which copper occurs together with iron. The darker threads of iron run through this sea-green ore of copper. In various sea creatures the breathing process is by means of copper, not iron. They do not need the fiery Mars-energy, but have a more tranquil mode of being. A simpler, copper-containing molecule is used instead of the iron-molecule haemoglobin. The octopus and the scorpion both respire using a copper-molecule in place of the iron-based haemoglobin. That same polarity functions in an inorganic realm in the principle of the dynamo (Michael Faraday realized the dynamo principle,17 October, 1831), where the relative motion of iron and copper generates electricity. Iron creates the magnetic field and copper wires carry away the current generated. The energy powering our civilisation derives from a pulsating Mars-Venus interaction, making alternating current.

To trace the connection of copper with Venus we have to go back to a distant mythological era: back, in fact, to a Mediterranean isle, once ruled by a love-goddess – the island of Cyprus. This island was regarded as the domain of Venus-Aphrodite. Aphrodite was referred to as the ‘Cyprian goddess’. In Botticelli’s picture, The Birth of Venus, she is depicted as being born from the sea on to the shores of Cyprus. It is from the name of this island, Cyprus, that the word copper derives. The word copper comes from the Latin word cuprum and this derives from the Greek work Kyprus. Cyprus was in antiquity the principal source of copper, and so the metal was named after it. Venus was felt by antiquity to dwell just where such large amounts of copper had condensed. Venus was credited with a sea origin, and copper reminds us of this connection with the water element. All copper salts are sea-coloured, blue or green. All the ores and all the salts of copper are hydrated, water containing. Nearly all copper salts are highly soluble in water. The iridescent hues of a peacock’s tail derive from green-blue copper complexes.