“Expecting an institution that has a long-standing systemic means of re-victimizing victims of sexual assault to care about exploiting race for public relations is the right thing to do, but unrealistic.” the Integrity Report on the Arizona State University Police Department

This is a lesson for Michael Crow to leave public relations to professionals. This time he was in such a hurry to piggy back on all the media attention of the executive order banning travel from 7 countries, that he made a complete ass of the university by labeling Arab Americans, graduates of the university, as foreigners. By rushing to exploit the racial and religious tensions of this issue for university public relations, Michael Crow made the classic bigot error of assuming Muslims are non-American. Unbelievable, he should be ashamed of himself.

Expecting an institution that has a long-standing systemic means of re-victimizing victims of sexual assault to care about exploiting race for public relations is the right thing to do, but unrealistic. Nonetheless we are glad others are noticing the troubled management model of Arizona State University. Take a look at how Arizona State University president Michael Crow was in such a hurry to take advantage of a public relations opportunity, but exposed bigotry in the failed attempt.

Here are articles in response to Michael Crow’s original editorial:

The article by 3 TV News in Arizona. 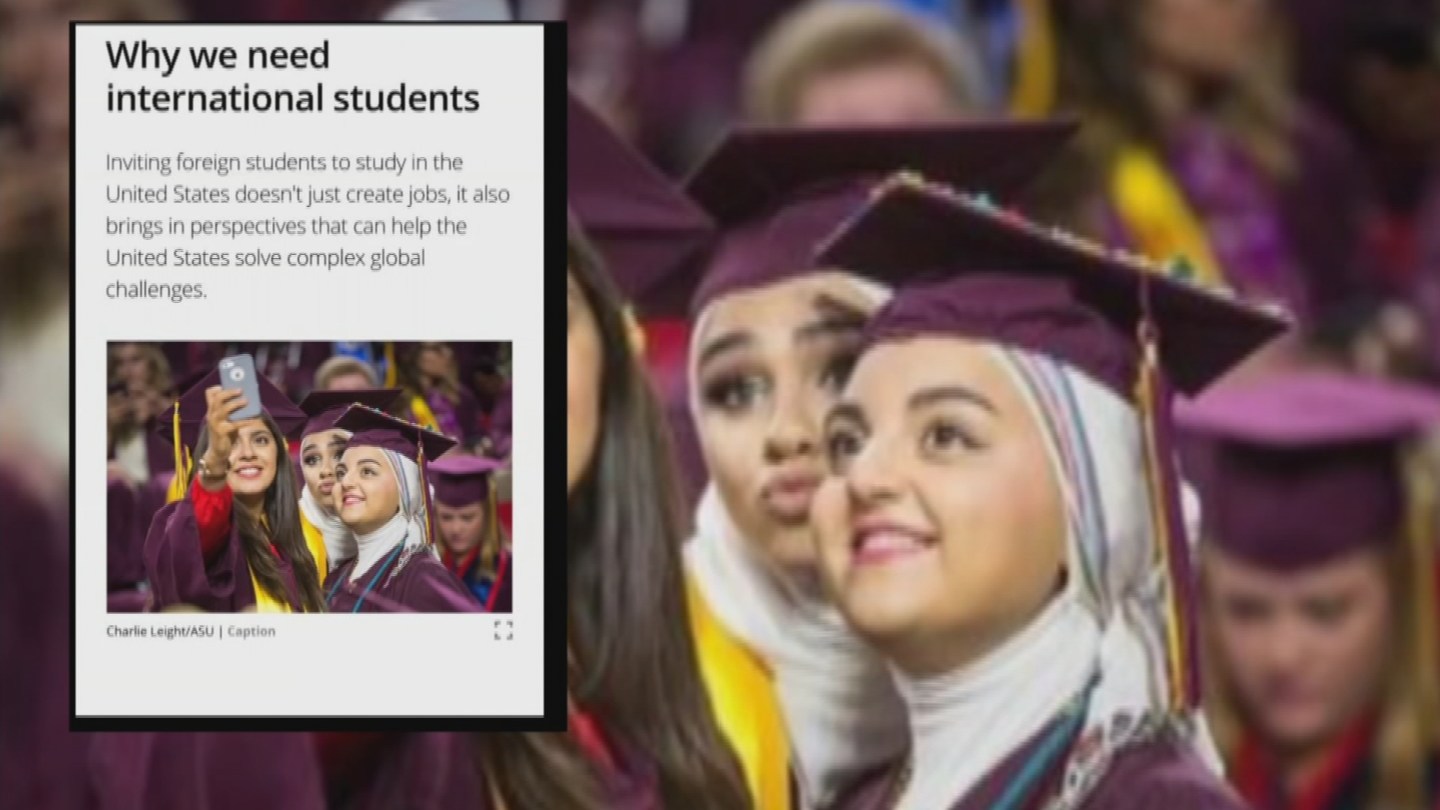 An op-ed piece written by ASU President Crow about international students included a picture that had three Americans in it. (Source: 3TV/CBS 5) 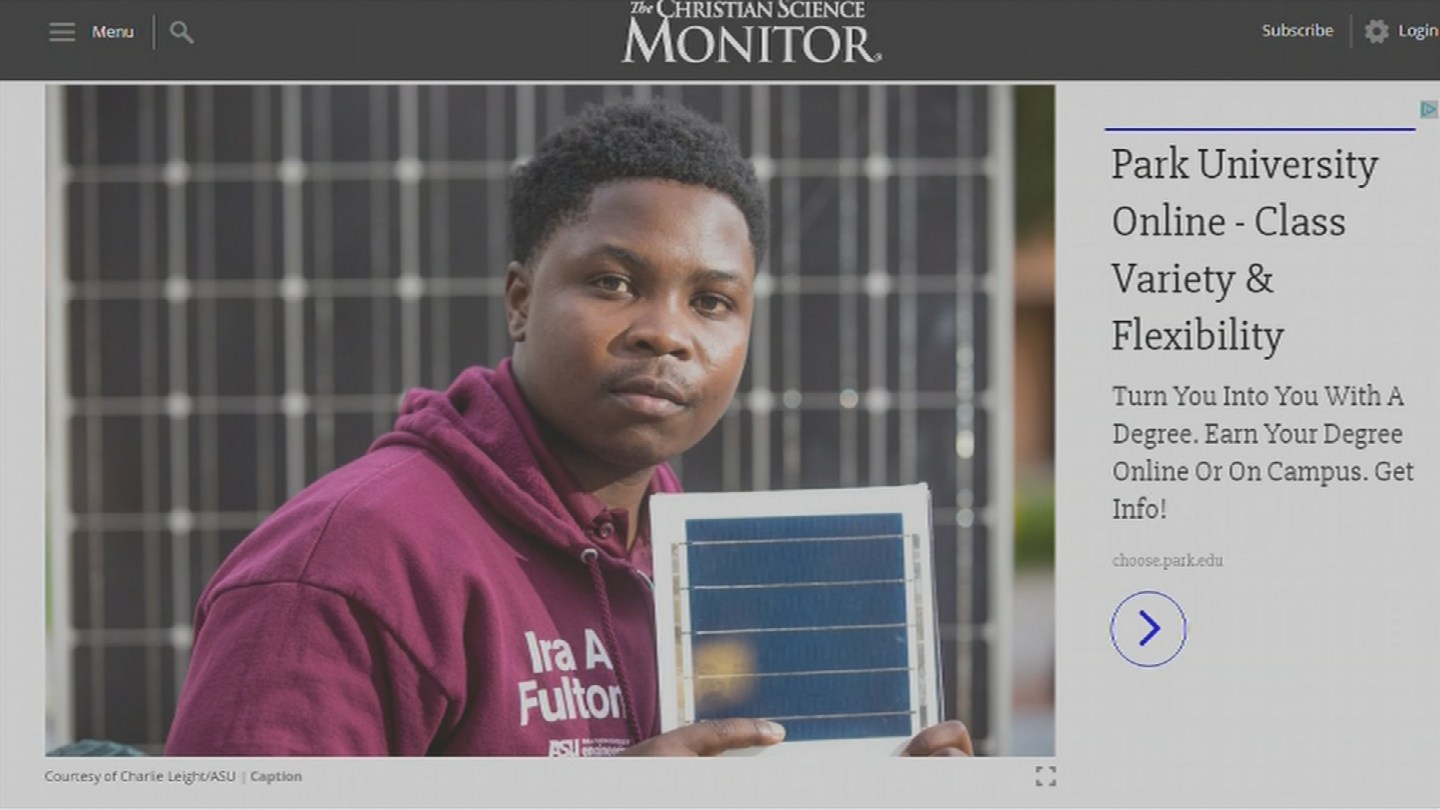 The picture was later replaced with this one. (Source: 3TV/CBS 5)

MESA, AZ (3TV/CBS 5) –A trio of ASU graduates and American citizens were offended after the university included a photo of them in an op-ed piece about international students.

“It was kind of shocking ’cause I was like this can’t be real,” Nshwah Ahmed said.

In the photo, the three friends can be seen snapping a selfie at their graduation last May. Ahmed was wearing a hijab.

“It’s offensive because especially in today’s current political climate, it’s one that is trying to erase the Arab and Muslim identity as Americans,” she said.

The op-ed was written by ASU President Michael Crow and it ran in the Christian Science Monitor. It was about the importance of inviting foreign students to study in the U.S.

He made reference to the current administration’s travel ban saying, “It’s important to recognize how significant the impact may be on international students studying here and the institutions that both educate and depend on them.”

“By trying to seem accepting they went ahead and racially profiled us and it came off as more racist than anything,” said Ahmed.

She shared the article and photo on Facebook. It did catch the attention of President Crow, who responded to her post saying, “Thanks for bringing this to my attention. We apologize for this error and will see that it is corrected as soon as possible.”

ASU sent this statement in response to the error.

“Over the weekend, the ASU media relations team made a mistake related to the international students op-ed that Dr. Crow wrote. In our search for a compelling image on a tight deadline to go along with Dr. Crow’s op-ed we passed along a picture to the publisher without doing enough due diligence on the people featured in it. There is no excuse for the error, and apologies have been issued to the alumnae in the picture.”

The photo was changed shortly after the university was alerted to their mistake.

Ahmed says she appreciated the quick response but feels this only fuels the current and divisive political climate.

“By implying that, oh, because you look a certain way you’re international or not American, it’s saying you can’t be Muslim and Arab and American at the same time,” Ahmed said.

Ultimately, she says someone should be held accountable and she wants to ensure this never happens again. Right now, she says they are looking at their legal options. Q: What kind of expertise and professionalism can victims within the Arizona State University community expect from their police department detectives?

A: Rookie expertise & less professionalism than a fraternity during pledge week.

If you are investigative reporters and looking for a story, look no further than one of the most important aspects of a police department besides patrol, detectives, the branch that is supposed to follow up on unsolved crimes and close cases.

Since this article came out, nearly everyone in the ASUPD Detectives scattered to the wind and have been replaced? Why?

Under the new management of Chief Michael Thompson, the ASU Police Department has seen many recent changes including the creation of two new roles within the force for Special Victims detectives.

ASU defines sexual violence under the ABOR Student Code of Conduct as sexual misconduct, which includes any kind of non-consensual sexual contact attempted or executed without consent or under circumstances in which consent cannot be given, such as when one is under the influence of alcohol or drugs, disabled or a minor.

Sexual misconduct also includes sexual harassment, which is constituted by sexual behavior that creates an environment of intimidation, hostility or offense.

Short said the detectives will be working closely with other agencies such as the Maricopa County Attorney’s Office, the ASU Office of Equity and Inclusion, the ASU Office of Student Rights and Responsibilities, Family Advocacy Center Services and the university’s Title IX Coordinator.

Short said Special Victims detectives will investigate all cases in their jurisdiction, which includes the four ASU campuses, regardless of whether students are involved.

Crimes involving sexual and domestic abuse are of an inherently sensitive nature. While ASU seeks to educate its students about these crimes and encourages all victims to report acts of sexual violence, that is not always what happens, Short said.

“It is the responsibility of anyone having knowledge of sexual misconduct to report the information, but ultimately it is the victim’s choice to pursue one or more of these reporting options,” he said. “It is…the victim’s choice as to how the case will be conducted. If the victim chooses not to take police action, the university has other resources…who can assist in an administrative investigation based on the circumstances and the victim’s discretion.”

Director of ASU Wellness Karen Moses wrote in an email, “The increase in awareness seems to have had a positive impact, as the percentage of female students who reported having experienced attempted and/or completed sexual assault decreased from 4.7 percent to 3.1 percent from 2014 to 2015.”

Moses said she is hopeful that a specialized unit for Special Victims will encourage more victims to report crimes.

Statistics aside, Franks said “focusing two of our detectives on these types of crimes is an effective use of personnel and expertise.”

Adding the Special Victims Unit was just one of the many changes that have happened at ASUPD.

Since Chief Michael Thompson took over, ASUPD has hired more personnel, including two new officers this summer and 15 in the past year. The department began training the force in diversity and cultural awareness, as well as implemented the LiveSafe app.

Franks said the app and its various features have proven successful so far, although there are only 3,336 LifeSafe users, with 1,091 using the SafeWalk feature and 10 using the SafeRide feature, which was launched on July 11 to allow students to request Safety Escort services.

There was also a LiveSafe scavenger hunt from August 11 to August 23 designed to raise awareness for the app.

“We are always looking for smarter policing approaches,” Franks said.

We the Police: The relationship between Tempe and its protectors

Curious about how your daughter’s potential future sexual assault will be handled? Look at this.

Look at the record from actual Arizona State University students victimized 1st by a criminal, 2nd by how the ASUPD mishandled their cases, and 3rd by how they were victimized again by the ASU Administration. The Arizona State University, like too many colleges in the US, has a disgusting RAPE CULTURE. The university response has been to run a useless publicity campaign.